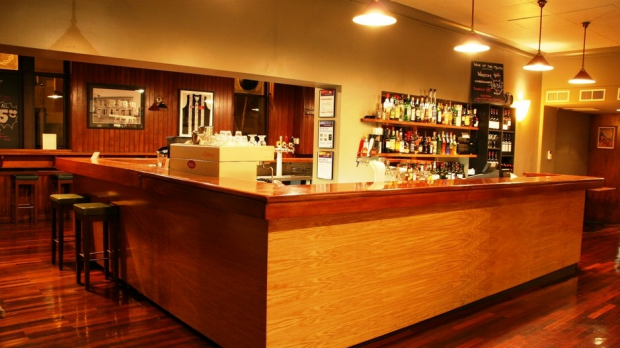 Second review as DeBortoli Pub of the Week (last July 2012).

What a little-known, Melbourne treasure is the Royal Standard Hotel.

Almost anonymously tucked away at the north/west end of William Streett, (past the netball courts in Flagstaff), the RSH is a reminder of that elusive spot you went to at lunchtime for a quiet one, when having a 3-6 pot lunch was not an OH&S issue.

Old brick boozer, 2 rooms, old style bar, honest pub tucker was its calling card and now, in 2017 has returned to its glory days.

Better still, it trades all week rather than 5 working days, and now run by Frank, owner/operator, it brings  a wealth of hospitality smarts that the family has developed from running restaurants in the ‘burbs.

The menu is essentially Italian, generously served, and priced so fairly. Beer’s good, all ages welcome and once there, you barrack for its success and more importantly longevity.

For all of us who went to a pub in the 60s/70s to try a bowl of spaghetti bolognaise for the first time – maybe the Continental in Lonsdale st, or the nearby Canada in Carlton – now is the chance to return the favor to your kids.

And then explain to them the significance of the red/white check table cloth.

The menu is Italian, dotted with a selection of pub favourites.

While there are homemade desserts e.g., tiramisu, mixed berries, there are scoops of ice-cream/gelato with 3 setting you back $6.

Bread supplied to mop up on request.

This is wonderful, fairly priced pub grub at a higher level.

Beef Burger, with the lot – egg, cheese, tomato, bacon, lettuce, chips. Very Good. $18. Massive patty, wagyu used, excellent consistency, all the trimmings, with a house made bbq sauce, that for once was neither saccharine nor cloying as this fav can be.

Commercial beers, mainly Carlton Utd., well presented, pots with handles (don’t know why it’s a big deal with blokes) and very much much unders at 4.5/pot.

This is where an owner/op gets it: a family understands attentive staff is its best form of marketing and once in the door make them yours.

The RSH does this beautifully.

When last visited, I felt that the pub was going through the motions a bit.

Now with the family providing the love, and committed to its continuance (sadly too many great pubs of Melbourne are disappearing), the RSH is back and firing.

Look it is not the Grand in Burnley Street, Richmond, whose textured and intricate Italian dishes are acknowledged by the food cognoscenti of Melbourne.

To be fair it does try to emulate that wonderful pub’s style.

However if you are familiar with another much loved pub of Melbourne, Leinester Arms Gold St Collingwood, then you have the idea.

And the final kicker? Explain to the kids about the Truth newspaper whose HQ was just around the corner and if they are old enough, a little section of that paper called Heartbalm.

They won’t believe you.