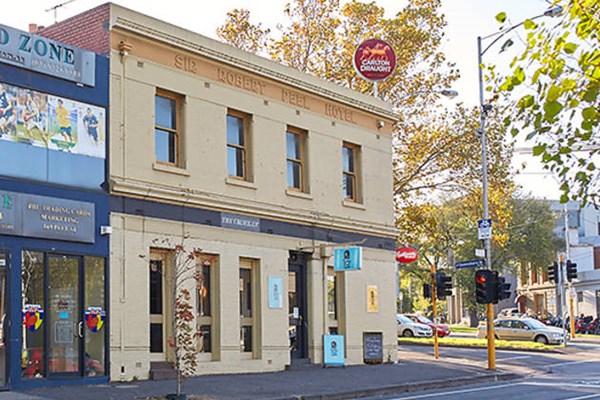 This pub has worn many hats along the journey mainly trading as the  Sir Robert Peel (SRP). My first recollection of this was Jose D’Oliviera’s opulent re-imagining of your local (30 years ago) to an Eastern european food and vodka hangout.

Now as Bobbie Peels (think modern British police force), it trades as simple, unaffected pub/tavern, old school,  with loads of bare wooden tables and floorboards, nooks and crannies here and there and a small beer garden on the first (ish)  floor with, well basically views of nearby dwellings.

Can’t help but like its simplicity and offer. The food is summed up as modern pub inner urban grub, the wine list is small but offers point of difference, and the tap beer embraces craft.  Ripping soundtrack in the background that doesn’t dominate but supports the mood: not vice versa.  Any takers?

And with a genial host, happy and willing staff, a good night is had. The age reach too was astonishing from a couple with baby in pram, to Mum and Dad that would have seen it change here over the past 50 years.

Bobbie Peels: The more things change the more they stay the same. Hallelujah.

Entrees/Share plates are kept to a minimum and embrace the taco/croquette/popper path and use spices/sauces to jazz it up, e.g., smoked chilli bean nachos with a pico de gallo salsa ($16), or sweet potato and sage arancini with a smoked tomato sauce. ($16). Share them around.

Mains too have some dash e.g Spiced Pulled Lamb & Grain Salad w/ lentils, quinoa, seeds, nuts, herbs & cumin yoghurt w/ pomegranate (20) or a 300g Porterhouse, rocket and parmesan salad, fries, RWJ at $28, and on Tuesdays is significantly cheaper. A couple of desserts round out a really interesting modern pub menu.

Mac N Cheese Burger, fries,  spicy aioli,  $16.  Not Bad. Part of the Thursday night “Burger” specials, this was something different and assembled large to suit the excellent brioche.  Just a little dry for mine, but nonetheless was knocked over.

A tap and bottled  temple to a range of local and imported crafts served from a brilliant ‘let’s stand around and have one bar’, which has its own separate space.  The ever popular Stone and Wood Pacific at $10 pint was the choice and well presented.

Owner/operator, genuine great vibe, happy and inviting. Even at 9pm, good crowd in, the energetic staff was eager to please after a long day.  The publican has been well taught and was a warm host, happy to tell you about the pub, explain some of the beers and outline a vision.  Engaging for sure.

I have lost count as to how many iterations there has been of the SRP but for the moment, the new chums have it spot on, trading as Bobbie Peels.

There is a good trick here as even though it is one – split level – space, you can put the tent pegs down and claim it as your own.

Indeed other owners may want to see what they are doing here. For sure it is not ‘shoot it out of the park stuff’ but,  (to repeat myself) the ease and simplicity of the offer simply works.

And Bobbie Peels, like so many of its nearby brethren, genuinely adopts the less is more approach to its food and drink.  To me this is the new  normal rather than elongated food menus that tread a well worn path.

Hopefully the new operators have a long run. They deserve to. It’s all good.