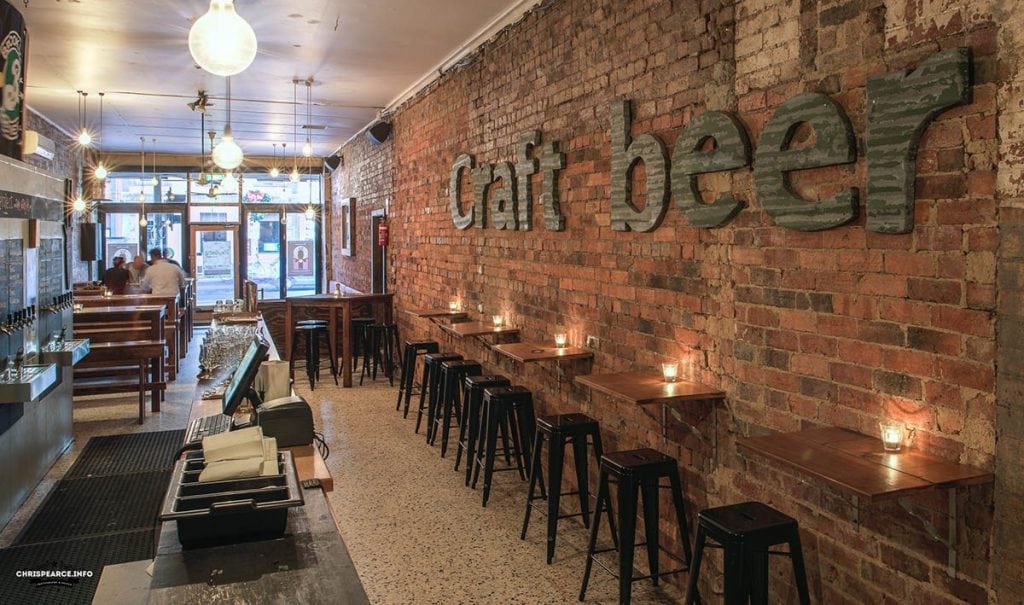 What a smart, yet simple offering The Alehouse Project (TAP) is.

Starting out as two shopfronts on Lygon St., Brunswick E across the road from the colourful Quarry Hotel, TAP has blended comfortably into the Pub/Bar model so prevalent in the suburbs now and this pub has the look and feel of many of its traditional brethren in the inner burbs.

On entering the pub, (exposed brickwork the main feature), it is a throwback to an old primary school classroom with wooden tables and chairs aplenty, an old couch or two to spread out, and a narrow path past the bar to a very old pool room to a rustic (that’s the kindest word i can find) beer garden.  Adjacent room is similarly  set out.

But it works so well (NoTAB/No Pokies) with a staff that’s almost too kind and hospitable.  Rotating craft taps dominate the beer landscape and what is liked is the dominance of lesser known craft taps.

(As an aside, there are beers that are termed craft, but are not really craft in the truest sense with massive manufacture and support from the big boys: not that you would know.)

Food is best described as american diner/short order cooking/burger/wings that suit the type of beers they present. TAP operates Wednesday to Sunday.

The Alehouse Project is good fun.

Something to eat and drink, sit back and socialise with friends. Best example of the feel of TAP is its burger range. Named after the staff, you can order (all $16), the Dave (Cheese), Daryl (Mushroom and Halloumi), ShaneO (vegan).  All come with a different support crew and a good size whack of hot (a little too salty) chips.  The Parma at $22 is the top price on the menu.  Good range of mexixan entrees and fair offering of vegan dishes.

Beer is their thing. As it is rotating taps – weekly – what’s on then isn’t now, and won’t be soon. Curiously a good range of Glen Iris’ craft brewer Deeds was supplied here. The Lager was very good.  (How curious.  A brewer in a suburb where there are no pubs!).  But if you like Lemon Sorbet Sour,  Citrus NEIPA, Vanilla Porter, or something from the road less travelled, TAP will support it.

The average prices are;

The rise of the multi faceted Local Bar/ Craft Brewery has risen as a real alternative to your local pub.  By and large, they serve the same functions as pubs do: food, drinks comfort, social.

But the clincher is catching the feel of a pub so that any points of difference between the traditional and new are barely distinguishable.

The Alehouse Project catches that feel in a simply delivered good slice of hospitality.