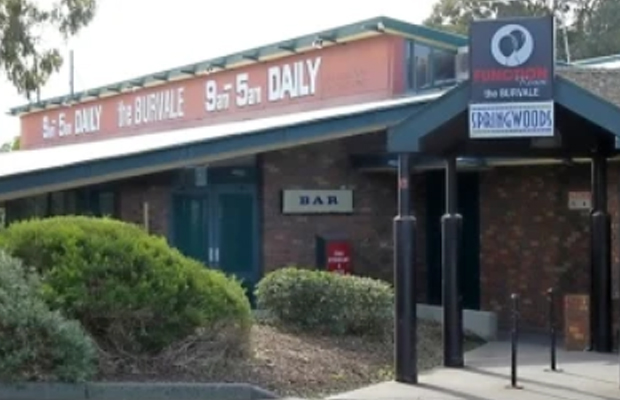 A mere mention of the Burvale to like minded souls, will always bring a recollection of years past. The pub, that should command its own postcode is simply monstrous with the pub being Gulliver, and the patrons Lilliputians, as you enter a world of outer suburban big.

The pub, a conglomeration of areas, has a massive sports/front bar with 8 pool tables in the slightly raised area, a medium sized stage for the bands, big TAB and a stack of taps to slake the thirst.

Through a door to the Pokies area, up the back for the massive dining room, and to the side/rear,  28 rooms for accommodation.

Think Hooker display homes of the 70s and that’s the look.

While the food and drink runs to the formula established by Woolworths/ALH, my impression is that the pub is slowly and steadily raise its game to be considered more than ‘just a pokies pub’. The offer, which is driven from within, was a step above what is considered the norm and can win a few hearts and minds.

And the new breed of suburban rock kicks in.  Long gone are the legendary battle of the venues that the great Donnie Sutherland would eagerly inform us on Saturday morning..”the house record at the Bondi Lifesaver held by Mi -Sex was beaten by The Radiators etc’,.

Now it’s a stack of talented tribute/heritage  bands to relive those glory days and if in any doubt that they aren’t popular,  go along and see the throng.

And then bore someone sideways at the Burvale, with comments such as ..”Saw the Oils here in 1978, or  The Radiators, still hold the the house record here from 1979’.

You have seen the Woolworth/ALH menus before.  Dips, Bruschetta, Chips, Calamari for the starters and Parmas, Burgers, Grazier steaks making up the bulk of mains.

But interestingly there was some different that appeared on both standard and special menus and these were the go-tos.

Beer stuck to the road more travelled but CD – $5.3/pot – was tried in 2 different areas of the Burvale – but the fact is the taste from the front bar and then in bistro was identical and good. (You may think that’s a naff statement, but I promise it’s not so commonly achieved).

Similar deal with the wine list – heavily Treasury wines accented – but a sneaky bargain or two pops up at ALH pubs regularly.  This time one of Australia’s wine traditional standard bearer – St. Hallets – was served at $8.5/glass.  Western Front Shiraz and as befitting of this maker, was very good.

Stock standard as far as order at the bar for food and drinks, meal brought to the table. But with a more mature crew on, the tables were frequented more regularly just asking if all was ok (I like that; some don’t), can we help etc.

8/10.   Right level and it was the soundtrack of the 80s/80s/80s.  But a forgotten gem kicked in. The Rembrandts, an 80s soft/rock/pop duo – had the theme to Friends.  But a melodic medium pacer of theirs – Just the way it is, Baby – came on. Ripping song, very ‘your time at the Burvale years ago’ kind of tune.  Play it today. A Beauty.

Yes. Went for a wander, through this door, turned left/right and I actually was lost and had to ask directions back to the front bar.  This has never happened before.

In many respects, the Burvale should be looked at with a gentle reflection and reminder of where we were, at a time in our life less complicated.

Can’t be sure if it was the first barn in the Melbourne Metro area, but certainly the most famous with its bigger than everything way it went about things – especially when it came to Pub Rock and a game of Pool. Everyone can recite a time they ventured there in search of whatever.

Now part of the monstrous Woolworths/ALH group the sheer magnitude of running a business this big is daunting, but to be fair, thought that the offer of food and drink was fine by comparison, all served happily.

Big barns are easily criticized and some of which is deserved. But when you can see a pub, such as the Burvale having a genuine crack of lifting their game, then more fair play to them.

Ps: For the record, AC/DC and the Angels are playing there October 26. Yes, the tribute bands, but stand far enough back, Woodstock and Cola in each hand, and you’ll reckon it’s the real thing!