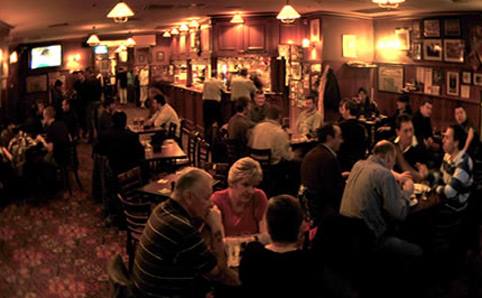 The Charles Dickens Tavern Hotel (CDT) has been a quiet Melbourne fixture in the Block Arcade for at least 3 decades and even though it is a first visit, once you head down the stairs you get its appeal.

One largish room, bar in the middle, the look and feel is one of an old England tavern and once you choose a beer, it’s either table of bar to gather and discuss the events of the day.

And this is the essence of a tavern as you make your entertainment (no TAB/No Pokies), with a range of sports kicking in over a number of teles. It is not a sports bar per se, just a good sized space showing sport, with the heart of an old pub.

Seven days a week (including Sunday), long hours in the CBD, but on the weekend has a flexible closing time, so if it’s some late night premier league, you can watch in the safest surroundings whilst enjoying one.  Nondescript furniture and fittings, but that’s the point of it all; the CDT works without having to trick things up.

Food is straight and down pub grub, but they love their beer, with obviously a heavy leaning to the British.

A curious occurrence however. My best guess is that there are 20 or so tables to dine at. I ordered and ended up on table 73. Hmmm.

Good solid pub grub, no real frills, although a special of Curry sauce and Chips had a curious appeal. ( A  TV show by a similar name appeared in the early 70s – google it and you’ll understand why it cannot be publicly re-broadcast). Salted chicken wings, spring rolls for entrees,  Shepherds, Beef/Guinness pies and a Chicken Tikka Masala curry for the mains.  Pricing is very fair.

This is a real beer pub, with a stack of taps doing commercial local, craft and imported.  You can get a pot but it is pints that appear the preferred receptacle.   For a change tried the London Pride 6.8pot//13.5/pint.  Served at room temp, which is a shock to the Aussie palate! Acquired taste for mine. Furphy, Mc Ewans, Tetleys, CD.  30% off craft on Saturday arvos.Wine list is stock standard Treasury Wine list around the $10pg mark. Leo Buring, Pepperjack, T’Gallant et al.

It’s basically one bar, on one floor. Order everything at the bar, bring it to the table. Happy staff, slightly older,  with an accent to legitimise its assumed heritage. As Liam sang…..D’yer know what I mean?

8/10.  No intrusions on a busy lunchtime as it played gently in background.

Yes. If you fancy watching a sporting event on Saturday nights – but don’t think it is being shown in a pub, here is your salvation. The CDT has a licence that allows it to vary closing times so if it’s going at 5 in the morning and you are in town, you can watch it while enjoying the facilities that a tavern can provide, without any problems. And it trades Sundays.

The CDT describes itself as a hidden gem – and it’s all of that.

Like its nearby neighbour – the excellent Sherlock Holmes up the road in Collins – its simplicity in creating a club like subterraneous watering hole, is achieved through good service, food and drink and establishing an identity.  Memories of the Winchester Club on Minder hits you.

Here it is sport, overseas, day/night while enjoying SOME pub grub and different beers on tap. It all works. Nothing too clever, after one visit, you’ll be making this as a place of catching up with friends either to start – or finish – a night in town