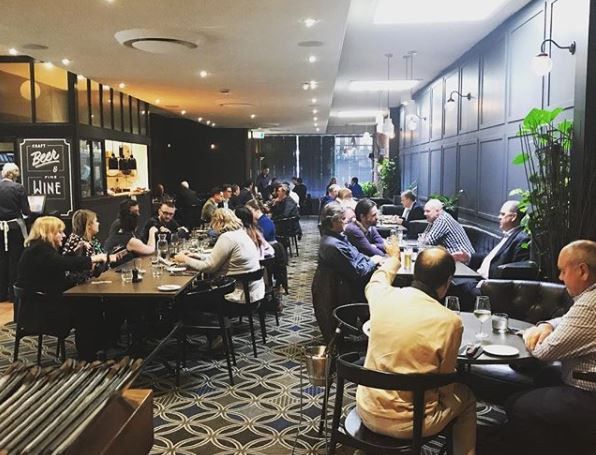 In a time not that long ago, chooks (yes, chooks) wandered around the yards of the Notting Hill (aka the Nott). Feel free to ask any middle-aged former Monash Uni student for verification. The pub was run by one woman for 7 decades.

The Nott is this sprawling expanse of pub with a raft of different areas to eat/drink and be merry. Taken over some 4 years ago, much was done to update, modernise, but above all, retain the feel and love that this pub enjoys, hard won affection over many years.

This has been achieved in spades. Whether it is the front bar for the old barflies – with TAB to watch the sports, the Uni Bar to congregate and have a meal, or the modern Steakhouse Restaurant, so neatly appointed with brown/caramel shades aplenty, then to pull this off to the extent they do is a feat unto itself.

The highlight is the Courtyard. There would be public schools in Melbourne that are nowhere as well set out as this. Beautifully paved, expertly manicured, this is an area to enjoy, especially now the warmth is kicking in with some Sunday music sessions.

Meal deals, the biggest hitters on the Melbourne Comedy circuit, trivia, the gazillions that have been spent are paying dividends.

This is a fine suburban pub.

Depending on where you eat in the Nott, the prices will vary (but not by a great deal). For example, The Uni bar and bistro offers burgers around the $20 mark, Parma $26.5, Salmon, fondant potato, fennel salad $27.5.

Added to this is a separate area to order pizza, around 10 choices , with a price hovering between $17-20.

Jalapeno and manchego Croquettes ($16.5). Good. The key to these dishes (include Arancini also) is freshness. The mix worked a treat, gooey spicy cheese, the pieces were good/large sized, all good.

BBQ King Prawns ($21.5/3 pieces). Very Good. Arriving on a plate with betel leaf, bean shoots and a well balanced nam jim, this dish fell between entree and main, but credit to the pub as the barbecuing added a depth to the prawns without overpowering them.

Chocolate Brownie, ice cream, raspberry, coulis ($14.5) Good. Good sized slice, the raspberry added a sharpness that cut through the sweetness of the chocolate. A little pricey, to be honest.

You’re in the ‘burbs’ so yes there is Carlton Draught and other commercial brands, but some crafts also. The beer chosen was Kosciuszko Pale Ale – $7/pot. Clean and refreshing.

The standards that have existed for years are maintained and improved. Everyone here works in such a harmonious and charming manner it almost becomes a little disconcerting. It is not obsequious, just a ‘good to see you’ ‘how can i help?’ attitude. You never know, it may catch on.

Taking over from a legendary publican is never easy. Kath Bier, who ran the Nott for 75 years (maybe more), developed a rapport with local businesses and students from Monash that saw this pub simply adored. Sort of Muskets at 20 paces should you besmirch you cad and bounder.

Think about it – bands lose a lead singer and the in spite of best efforts it’s never quite the same. INXS, anyone?

But after a four-year run-in this pub is revitalised. The courtyard is stunning. The bocce rink lives on. TV’s everywhere to catch the sport. Inside choose your area – front bar, steak house restaurant, bar/bistro, takeaway pizza “shop”. Food prices, to my eye, are a little over, but not excessive.

Well done to the owners – the continuous improvement is paying off in spades. The Notting Hill is a fine example of how a big, suburban pub can be have broad appeal and deliver a better level of everything.

Pub of the Week