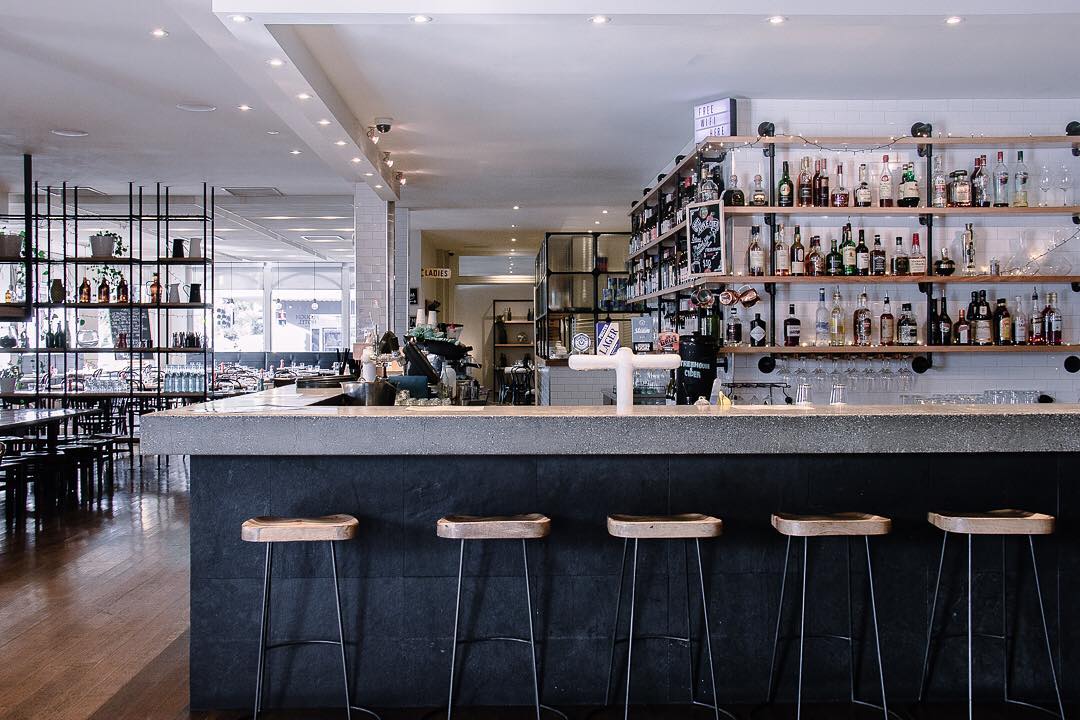 Around 5 years ago, just as Footscray was becoming a most desirable suburb to live, some visionaries saw something in the Plough Hotel that had been closed for some time and decided to go all in.

Let’s change the perception of how pubs are viewed here: Let’s bring  a higher level of food and drink here and see if we can make it work.  At that stage, only the wonderful Station Hotel – DeBortoli Pub of the year 2009 – was pitching higher than what the majority was doing in the West.

The results are here to see. The crowds came, happy to shell out some extra readies, for the promise of better meals and surroundings, and now it has established itself as an acme pub of Melbourne.

Part of its success is the recruitment of Scott Thomas, one of the best pubs chefs (Court House Nth Melb for 10 years in 2000s) who understands how to do a sharper level of pub grub.

From the elongated room on entering from Geelong Road, you walk past a smallish bar  (not really set up for 10 or so to stand around and crap on about a beaten favorite) and survey the long room, exposed kitchen, communal table and take a spot. Bookings advised and you will dine close to your next door neighbour.

Fine accommodation is available if you want an overnighter.

The menu is expansive with a monstrous array of entrees and mains – all with points of difference that demand a reading and then some.   Themed nights are commonplace and currently Octoberfest is in full swing.

The Plough is a good pub.

Yes more familiar territory is covered but I highlight those above as this represents the type of pub food that the Plough has done from the get-go, knowing full well if they fail it is spectacularly so!

And that’s why the pub trades brilliantly most nights.  Pizza, with an array of toppings, again not running to the formacrd are available around $20.

Chorizo Pizza  tomato, fior, mushrooms, caramelised red onion, rosemary, basil  $20.  Hmm-Ok. While no issue with the toppings and fine combination they were, the base spent about 30 seconds – 1 minute too long in oven arriving overcooked and a tad dry.

Fish of the Day.   Barramundi, harissa broth, clams, black sesame fregola. Very good.  $33.   Genuinely top notch seafood served here. Barra has been very much hit and miss in the past but it is very bankable now as delivering big, fresh, flavours. Great meal.

No Carlton Draught in Footscray.  Times have moved on. But kudos to the pub supporting suburban stars like Wolf of the Willows (Cheltenham), Kaiju (Dandenong), and 2 Brothers (Moorabbin).  Starts at $6/pot and Mountain Goat Steam – always good was tried.

No surprise that the wine list is monstrous.  All bases covered near and far so you should be well satisfied. To be fair there’s a couple of bottles under $45, but the majority do kick in at 11pg/50/bottle. Shadowfax Rose – a varietal whose star continues to bloom – was $11 and tried along with a Rocky Gully Riesling (WA) at $9.5/glass. Both fine.

Plenty of staff, knowledgeable and courteous, and even on a very busy mid week evening, the service for meal and drinks was paced evenly.

It is nice to note that some pubs are prepared to put on an extra one or two to make sure your experience met expectations.  They did.

The battle is never won when it comes to hospitality and Footscray is replete with options, not only as bistro/restaurants etc are concerned but pub competition has really ramped up, notably with the Victoria and Reverence joining In and doing great things.

The Plough is established. The bar is set high and in the second visit in 4 years was better than last.  Much depends on who is cooking as that is its calling card. Currently they have one of Melbourne’s best.

It is both interesting and reassuring for the owners of the Plough to look around the room and see that ‘old’ Footscray mixes in with ‘new’ Footscray. They took a chance and are rewarded.

The locals love it.