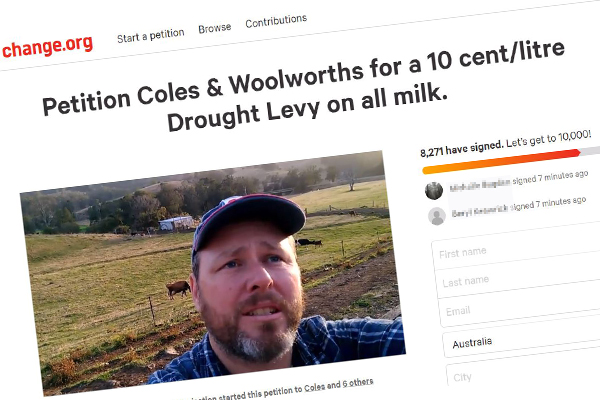 Dairy farmers in Queensland are calling on the major supermarkets to introduce a 10c levy on every litre of milk.

They say drought conditions have led to nationwide hike in the prices of grain and feed.

The Queensland Dairy Organisation has a petition running online with more than 10000 signatures pledged.

“Combined with lower than sustainable farm gate prices in both states, we are imploring consumers to get behind a petition to all supermarkets, in particular Coles and Woolworths, to increase the price on all milk by 10 cents per litre and for processors to guarantee that the full amount will go directly back to the farmers,” the site reads.

Brian Tessmann, dairy farmer and the president of the Queensland Dairy Organisation told Neil Mitchell farmers something must be done to help.

“Farmers been copping it hard for so long,” Brian said.

“The cost of grain has almost doubled in price, the price of hay is astronomical.

“The supermarkets say they listen to their customers and if consumers are telling them we want local milk and for farmers to survive.

“There’s really no excuse not to listen.”

Coles and Woolworths responded with the following statements:

Coles and our customers share the community concerns about the plight of farmers experiencing harsh drought conditions, which is why we are pleased to be contributing nearly $11 million to farmers and rural communities affected by drought.

Last month we announced the Coles Nurture Fund would provide $5 million in grants and interest-free loans for farmers who have a project which will help them to combat drought.

Coles is also raising money in stores across the country for the CWA’s drought relief efforts to provide more immediate assistance, and Coles is matching every donation dollar-for-dollar. So far, the funds donated by Coles and its customers exceeds $5.9 million, bringing our total contribution to nearly $11 million.

We understand there are farmers doing it tough in the face of the drought and have raised more than $7 million for Rural Aid to assist farmers in need.

We believe a holistic solution involving industry and government is needed to drive meaningful and long-term reform in the dairy sector.

The recent recommendations from the exhaustive 18 month inquiry by the ACCC into the dairy industry clearly need to form an important part of the policy discussion.