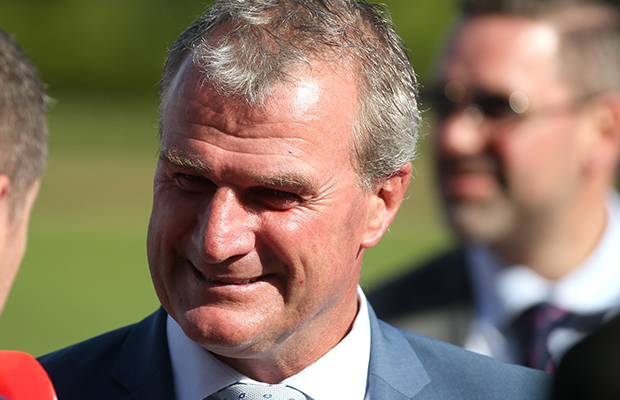 Police have seized four electric shock devices, known as jiggers, an unlicensed firearm and a substance believed to be cocaine after morning raids at the stables of leading Victorian horse trainer Darren Weir.

Three people, including Weir, were arrested but were later released without charge.

In a statement sent to its horse owners, Darren Weir Racing said it was going to be “business as usual” for the stable while the investigation took place.

“Our main aim is to ensure our owners are not disadvantaged by this process in any way,” it read (full statement below).

Weir, 48, was questioned by police on matters relating to multiple charges including animal cruelty.

As first reported on the 3AW Breakfast Rumour File, police joined stewards in an early-morning swoop at Weir’s Warrnambool and Ballarat stables.

“There were simultaneous raids, I think it’s the culmination of a long running investigation,” Leo said.

“Darren Weir came back from New Zealand horse sales last night and the raid occurred about 6am.

“I know he’s been arrested, there’s a line of inquiry on several fronts.

“There’s been lots of rumours around for a long time.”

At the time of the arrests, before all three men were released without charge, police said questioning was in relation to sporting integrity matters including:

A one-time small-time trainer in western Victoria, his rise has been meteoric in the past five years, including the Melbourne Cup victory of Prince Of Penzance in 2015.

Weir has runners in five of the eight races at Mornington today, including two favourites.

“Racing Victoria’s Integrity Services team has been conducting an investigation into the activities of licensed persons in the Warrnambool and Ballarat areas. During the course of our investigation we sought the support of Victoria Police’s Sporting Integrity Intelligence Unit on the matter, instigating their investigation.

“The Sporting Integrity Intelligence Unit this morning executed warrants at properties in Warrnambool and Ballarat where they arrested three licensed persons for questioning. Members of the Racing Victoria Integrity Services team attended licensed stables to assist Victoria Police and to investigate potential offences against the Rules of Racing.

“As the matters are the subject of on-going investigations by Victoria Police and Racing Victoria we are not at liberty at this time to disclose the identities of the persons arrested nor the details of the investigations.

“Racing Victoria is committed to maintaining the highest integrity standards in our sport and, where appropriate, we will continue to work with Victoria Police on those investigations.”

“As you are most likely aware, Darren Weir Racing is the subject of an external review.

“Our main aim is to ensure our owners are not disadvantaged by this process in any way, and accordingly it is business as usual in regards to the training and care of your horses.

“We will make a more detailed announcement as soon as possible and are hopeful that this will occur sometime tomorrow.

“Thank you for your ongoing support, consideration and loyalty to Darren Weir Racing.”