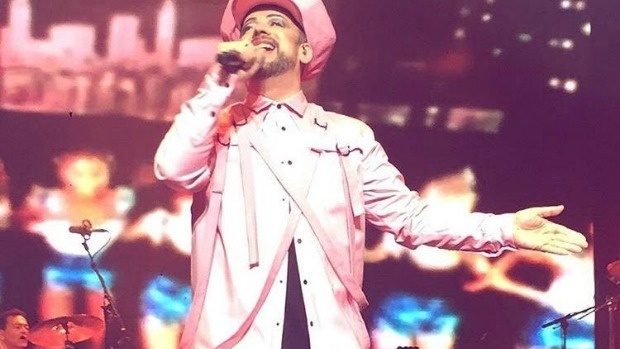 Culture Club have promised not to retire just yet. And rightly so, based on the 80’s band ripper Melbourne concert at Rod Laver Arena at the weekend.

Boy George proved his voice is still strong and his flirtatious,cheeky wit still in fine form.

Thousands had crammed into the venue on a rainy night, to hear their favourite tunes of yesteryear.

The show punched out many of the mega hits, in rapid succession: Church of the Poison mind, It’s a miracle and I’ll Tumble 4 Ya.

The constant banter from George was both endearing and entertaining. With a backdrop of videos and retrospective vignettes, George happily travelled back in time with his adoring fans.

Draped in an on-trend soft pink deconstructed trench and leggings and of course a hat, he expressed his joy at being in Melbourne, he spoke of the underlying melancholy lurking in some songs, then dedicated a song to ‘the beautiful fan with fluorescent gloves’.

George gave credit to his exceptional  backing vocalists and of course ? the band – amplified with brass, keyboards and a percussionist.

There were light-hearted moments when he joked about his addiction to Prisoner Cell Block H ( Prisoner to us) and urged all those who weren’t in love to put both hands up in the air.

On a more serious note, he questioned, ‘What is normal’. And he didn’t miss a dig at contemporary radio playlists  – ‘radio doesn’t play new music unless your five year olds.’

And then Molly Meldrum stepped out on stage to lead the crowd in a heartfelt rendition of ‘Happy Birthday’ for George.

There was a massive bunch of flowers and a few lovely words from an at times unsteady-on-his-feet Molly ahead of the encore.

Other hits included Victims, Karma Chameleon and of course Do you really want to hurt me.

Outfit changes were expected and satisfied the keen fans, several of whom had dressed up for the night.

There was some new music, a nod to reggae and gospel and even a tribute song to country legend Johnny Cash.

George and his gang gave a great show – fun, brash and brilliant. And full marks for the moving encore and final song, David Bowie’s Starman.