REVIEW: Jim Sherlock takes a look at Bonnie and Clyde (1967) 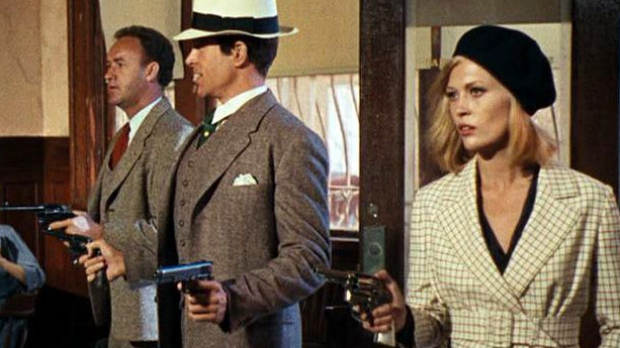 ‘Hollywood is too scared to take a chance, it’s losing its nerve’ said William Friedkin, the Oscar winning director of ‘The French Connection,’ followed by the landmark psychological-horror-thriller ‘The Exorcist,’ which for decades has consistently topped the polls as the scariest movie ever made.

As far removed from cinema today as it get, fifty years ago this year the conventional the old school Hollywood studio system and the ‘New-Wave’ of up and coming filmmakers and counterculture ideologies clashed with an impact that remains as potent, powerful and influential to this day.

In 1967 Arthur Penn’s ‘Bonnie & Clyde’ starring Warren Beatty, Faye Dunaway and Gene Hackman, hit cinema screens with such unrelenting force cinemagoers and aspiring filmmakers of the period would be forever cast in its shadow.

Rumblings of change were imminent though, as they had been depicted for nearly a decade with the ‘British New Wave’ of realism and the ‘Kitchen Sink’ dramas.

But most significantly, it would be the ‘French New Wave’ that was sweeping into to the American and Western conscience that would have a startling and unprecedented influence and cultural impact.

Back across the pond in the United States, Hitchcock’s ‘Psycho’ heralded in the new decade of the 1960’s with an all-new face to the horror genre and created its own tidal wave of change as it slashed its way across screens around the globe in 1960.

Widely considered the most significantly ground-breaking year in film, 1967 produced the first post war period of ‘revolutionary’ films that headlined the change and birth of the ‘New Hollywood’ movement.

The post WWII baby-boomer counterculture anti-establishment stance with the disillusionment of America’s and Australia’s involvement in Vietnam, Political Turmoil and Racial intensity was gaining ground and erupting all around.

The spark was now  ignited on this provocative and emblematic portrayal of early 1930’s depression era gangsters Bonnie Parker and Clyde Barrow, of a small town waitress who falls in love with an ex-con who together start a violent crime spree across the country.

Written by fledgling screenwriters David Newman and Robert Benton, both heavily influenced by the rising French New Wave movement, they sent their screenplay of ‘Bonnie & Clyde’ first to Jean-Luc Godard and then Francois Truffaut, who were both impressed, but ultimately declined.

On a visit to Paris, Warren Beatty, also influenced by the French New Wave, learned of the project through Francois Truffaut over dinner, and upon returning to the United States immediately contacted Newman and Benton.

Impressed with what he read and realizing unlimited possibilities, he purchased the rights to the screenplay, and before long was able to secure financing and distribution from studio giant Warner Brothers, who had a long established history with the gangster genre.

First time producer Beatty then offered the directing chores to a number of esteemed filmmakers, who all declined, before finally settling on a reluctant Arthur Penn, a gifted director born out of the period of the live television dramas of the 1950’s, and who he had worked previously with on the crime-drama ‘Mickey One’ in 1965.

Penn was also a great admirer of the French New wave cinema, but was also highly influenced by the work of Akira Kurosawa, in particular Kurosawa’s delicate and poetic approach to violence and the balancing of slow motion and real time that he employed in his masterpiece ‘Seven Samurai’ (1954).

With studio, financing, distribution and a director in place, Beatty first pleaded with then girlfriend, Natalie Wood, to take the role gun-mole, Bonnie Parker, but she fiercely, and continuously, resisted.

After considering a number of possibilities for the role of Clyde, including singer-songwriter, Bob Dylan who bore more of a resemblance to the real Clyde Barrow, Beatty hesitantly took on the role on himself.

Throughout production Producer and Star Warren Beatty’s persistence in pushing ‘Bonnie & Clyde’ relentlessly in a new direction would test the patience of everyone from director Arthur Penn, through the cast, and right up to Warner Bros. co-founder and studio head, Jack L. Warner himself.

Warner disliked the film immensely, and in a move that rocked both Beatty and Penn, the studio opened ‘Bonnie & Clyde’ with a limited ‘B-Grade’ release by sending it to drive-ins theatres and lesser regional cinemas, normally reserved for cheap schlock horror, creature-feature, teen beach musicals and sci-fi romps.

Warren Beatty then threatened to sue the company, and after much renegotiation during which, in an unprecedented move, they had given producer and star Warren Beatty a then unheard of 40% of the gross.

Now back in full control, Beatty, along with Penn, immediately began work on spearheading an entirely new marketing, release and presentation campaign for ‘Bonnie & Clyde.’

It was quickly secured as the official U.S. entry in the International Film Festival held in Montreal in 1967, as part of Expo 67, where it was accorded the honour of being the film that opened the entire festival.

The reaction from the Festival release was overwhelming, and with the all important and powerful word-of-mouth now in play, and a larger release, much to the surprise of aging Jack Warner and the studio he co-founded, the film became a box office sensation.

The Costume Design for the film by the Oscar nominated Theadora Van Runkle created an all new 1930’s style fashion frenzy, with Faye Dunaway adoring magazine covers all around the world, and a hit song by British rhythm and blues singer Georgie Fame with ‘The Ballad of Bonnie and Clyde’ hit number one in the UK singles charts and reached the Top Ten charts in the US and Australia.

One of the many filmmakers that ‘Bonnie & Clyde’ had a profound life changing affect on is Oscar winning writer-producer-director Robert Zemeckis, who would go on to helm such contemporary classics as ‘Romancing the Stone (1984), the ‘Back to the Future’ Trilogy (1985 to 1990) and ‘Forrest Gump’ (1994), to name a few.

Zemeckis recalls: ‘I was at High School and everyone was talking about it, so I talked my father into taking me to see the film.’

And he was far from disappointed: ‘I was so moved, it was so real, so vivid. I remember saying to myself that this movie was manipulating my emotions, and that’s when I realized that there was immense power involved in all of this. I knew this was something I had to be involved with.’

Zemeckis added: ‘That’s also when I learned there were writers and directors, and that movies had to start from the written word. I became obsessed and wanted to know everything I could about movies. Then I started making my own movies on eight millimetre film.’

With seamless blending of the old and new Hollywood, ‘Bonnie & Clyde’ pushed the boundaries of sexuality and establish a whole new threshold in graphic screen realism and violence through a filmmaking style then unprecedented in American cinema.

The archaic and outmoded Hays Motion Picture Production Censorship Code, established in 1930 in the aftermath of the Fatty Arbuckle scandal and murder of director, William Desmond Taylor, would subsequently be blown out of the water as a result.

Others films that would cause a significant shift in 1967 include Mike Nichols’ landmark social change coming-of-age comedy-drama ‘The Graduate,’ interracial marriage in ‘Guess Who’s Coming to Dinner’ from Stanley Kramer, and Norman Jewison’s deep Southern racially charged Oscar winning ‘In the Heat of the Night.’

The shifting ideological changes caused by ‘Bonnie & Clyde’ would create a tsunami imitators.

Filmmakers it would influence and the now classic and equally inspirational movies that would follow in its wake include Sam Peckinpah’s ‘The Wild Bunch’ (1969), John Schlesinger’s ‘Midnight Cowboy’ (1969), Stanley Kubrick’s ‘A Clockwork Orange’ (1971), William Friedkin’s ‘The French Connection’ (1971), Francis Ford Coppola’s ‘The Godfather’ (1972), John Boorman’s ‘Deliverance’ (1972) and Martin Scorsese’s ‘Mean Streets’ (1973), to name a few.

Through historical turbulence, chance meetings, mishaps, casting and personal and studio battles it was ‘The Movie Gods’ that came into play, as William Friedkin would also say.

Screenwriters Robert Benton and David Newman, producer and star Warren Beatty and director Arthur Penn created a masterpiece of unprecedented, innovative and undeniable power that would aspire to every level of filmmaking and storytelling as an art form, the zeitgeist of which has never diminished.