Bill Shorten is under extreme pressure to dump Sam Dastyari following yet another revelation placing the senator directly at odds with national policy.

Mr Dastyari has denied the claims.

It’s reported Mr Dastyari returned to China shortly after, with claims he warned Mr Huang his phone may be bugged and that they should go outside to speak.

Mr Shorten said he’d “made it clear” to Mr Dastyari that this was the last time he expected his judgement to be called into question.

Fairfax Media has now revealed secret tapes of Senator Dastyari delivering a detailed defence of the Chinese government’s aggressive push into the South China Sea, completely at odds with both the national policy and Labor policy on the matter.

“I don’t think Bill Shorten will stand by him,” Neil Mitchell said on Wednesday morning.

“I think Bill Shorten will probably dump him pretty quickly.

“I know he’s a pretty powerful man within the NSW Labor party, but Bill Shorten is not given to taking risks in this environment; he sees himself in a pretty strong position, and he doesn’t want to undermine it.” 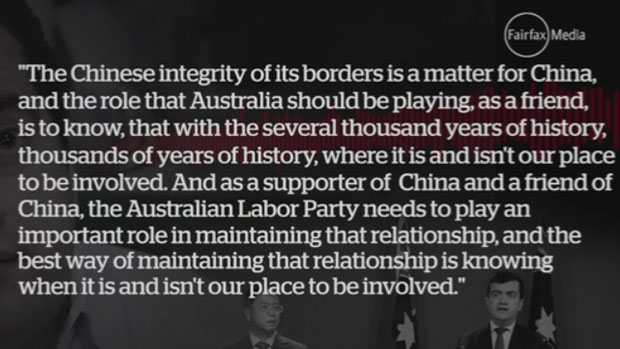