It’s an intriguing name, Borsch, Vodka and Tears. It kind of reminds me of The Pogue’s 1985 album Rum, Sodomy and the Lash, albeit a little less palatable triad of words than the restaurant’s moniker.

I haven’t ascertained if the name is some kind of Polish mathematical formula: borsch + vodka = tears. I can report, though, that vodka cocktails were drunk at our table and we supped on deliciously hearty bowls of soup and no one got upset. Some tears of joy, perhaps.

Opened in 2001, Borsch, Vodka and Tears has seen restaurants and trends come and go from skittish Chapel Street and survived to become somewhat of a Windsor institution. An exemplar of fun Eastern European fare, BVT has a list of vodkas long enough to make a Russian sailor weep and a sele ction of shareable stodgy food strong enough to keep even the most epic of hangovers at bay.

Good here is the white borsch, a pale rye soup with great hunks of meltingly tender pork that’s traditionally eaten on Eastern Sunday. The stodge factor hits fever pitch by the presence of a side of potato mash with bacon, which is used to dunk into the salty broth before it hits your gob. This soup will light a fire in the coldest of bellies. 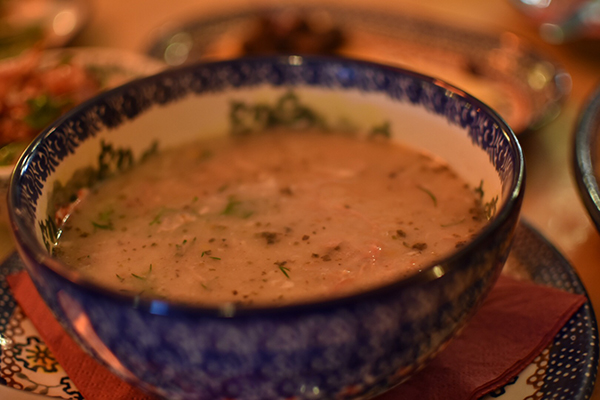 And don’t go thinking I’m using the word “stodge” as a negative; I married a Hungarian and some of the best meals I’ve eaten have been filling, carbo-loaded delights cooked by my mother-in-law, and that’s the approach taken at BVT: familial, Eastern Bloc dinner table dishes. In fact, my wife was getting a little teary for home while tucking into nostalgia-inducing cabbage rolls (golabki in Polish, töltött káposzta in Hungarian).

Dining with us at Borsch, Vodka and Tears were two of our vegetarian mates – vegetarian being a dirty word in Eastern Europe – but they were chuffed with their plates of cheese-stuffed zucchini flowers in a wonderfully spicy jalapeno sauce and pan-fried pierogi filled with beetroot, garlic and caramelised onion.

Other meat-free dishes include sheep’s cheese saganaki with honey vodka figs (of course) and a curious dish of vegan “fried chicken” (actually cauliflower). 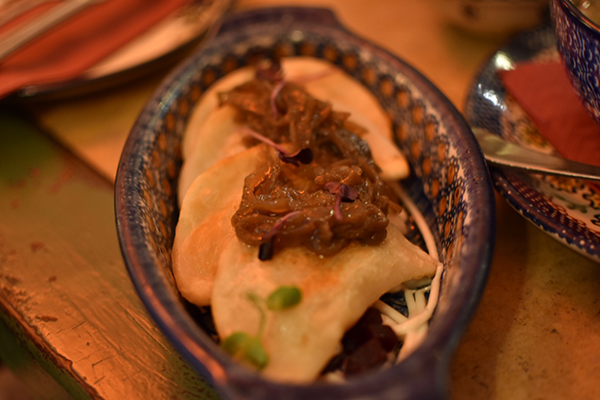 Whether you eat meat or not, the pierogi – aka polish dumplings – need  to be on your must-try list. We enjoyed the full-octane version: pasty little parcels pumped full of beef, chicken, bacon, onion gravy and raspberry vinegar. Delightful stuff.

As you might have guessed by the name, BVT’s drinks list is all about vodka. With more than 120 vodkas on offer, even the most strident gin or whisky fan will find something agreeable here to help polish off the meal. A handful of Polish beers and a dozen or so mainly Australian wines round off a beverage list that overshadows a comparatively concise menu – a menu that also includes some bigger dishes like spicy beef goulash, crispy-skin salmon with beets, and pork loin schnitzel, if you’ve worked up a hunger.

Borsch, Vodka and Tear is a Bloc load of fun, an ode to a bygone era where men got sideways in the side-street bars of Krakow and got into heated conversations over politics and philosophy. Come for the soup, stay for the vodka and try not to leave in tears. 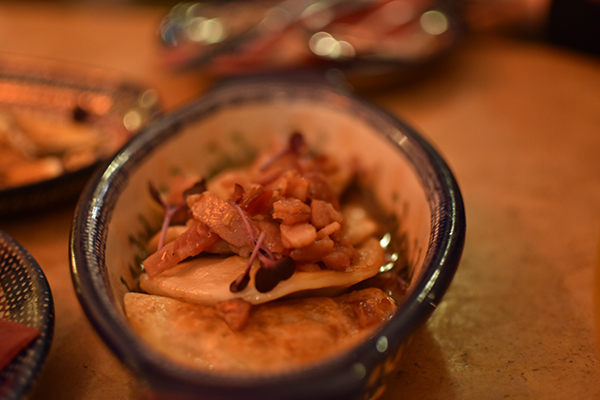