The Nordic countries are world-beaters at just about everything. Those super-cool Scandinavians – blokes with designer stubble, tortoise shell spectacles and architecture degrees, often ahead of the curve in so many aspects of modern life.

The best shows on television are Nordic noirs; they flog us in prosperity and well-being indexes, and hog the rankings on the world’s happiest nation scale.

They even speak betterer English than many of us Aussies.

So imagine my glee when it was announced earlier this year that Scandi-focused Sydney restaurant Mjolner had set its sights on a southern sortie with a view to conquer Melbourne.

Mjolner, a Norse tour-de-force, Viking-themed cocktail cave and classy carvery, has thundered its way into Hardware Lane like a flotilla of longboats on a raid to East Anglia.

To ascend to Valhalla you’ll first need to heave your way through the dark and heavy carved door, past the wooden longboat jutting out from the wall, climb the staircase to the suave dining room where your place among the gods is waiting for you.

Mjolner is a place where beer is swilled from drinking horns and axes, helmets and shields adorn the walls.

Once seated, a leather pouch is produced and diners are invited to choose their weapon of choice from a selection of intricately carved handmade knives.

If this all sounds like a hellish descent into Viking kitsch, allow me to happily allay your fears.

The folk behind Mjolner (The Speakeasy Group) also operate Eau De Vie and Boilermaker House, two of the classiest cocktails bars in this city. And that same flair for design and sophistication has carried through to the fit-out and fare at Mjolner.

This is high-impact, energetic, casual fine dining rather than a Kryal Castle-style themed restaurant.

The menu comprises “dishes that Vikings would have eaten had they been around today”, I’m duly informed by the affable waitress.

But the approach to food is more a reimagining of Old Norse fare, rather than a replication. You won’t be served a whole-roasted horse and asked to eat with your hands.

There are some great starters to kick off your feast; the list of entrees is where head chef Andy Wright demonstrates his finesse. 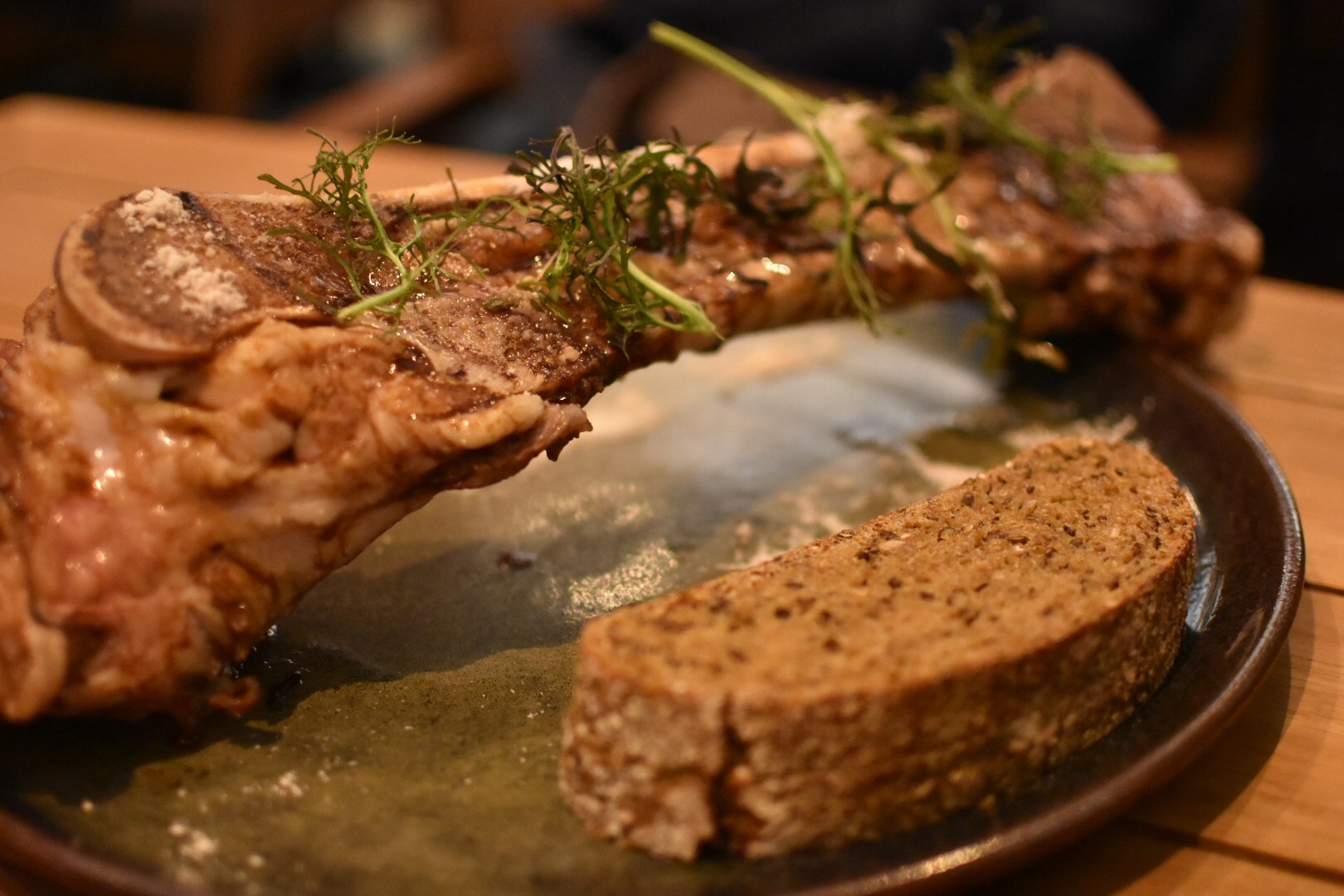 Order the roast bone marrow and you’ll feel like a king of Kattegat when a brontosaurus-sized bone is placed in front of you. Once you’ve scraped out all the marrow and lathered it on rye bread, your waiter will ask if you’d like to do a shot from the empty bone.

You need to say yes. 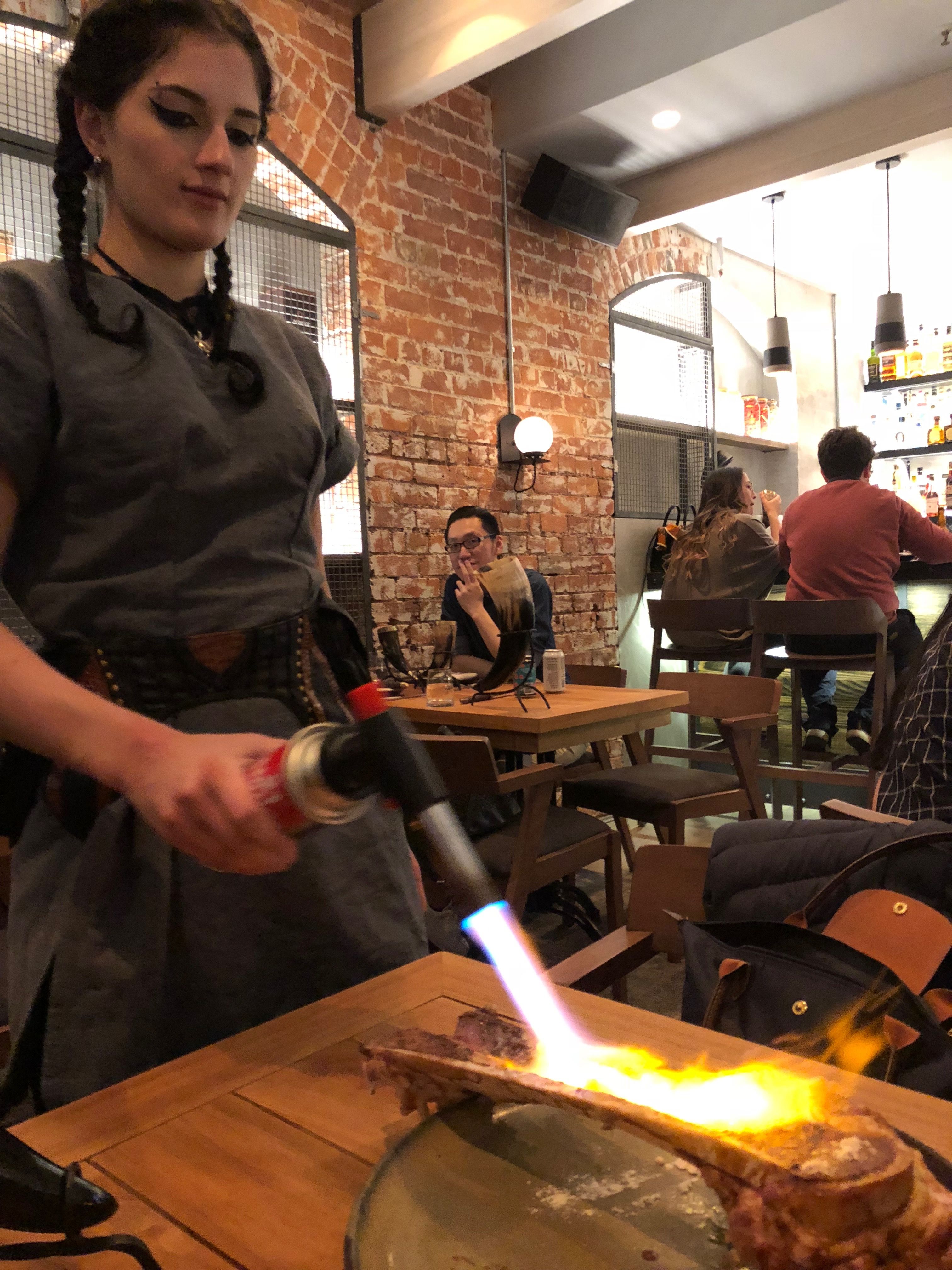 She’ll then whip out a flamethrower (I do exaggerate), give the bone a blast to caramelise all the gooey remnants and proceed to slide a nip of whisky down the hollow and into your gob.

It’d be rude not to. Odin would.

The Stormy Bay clams with pickled sea greens – served on a bed of pebbles, which look as if they’ve just been plucked from crisp fjordal waters – are beautifully plump and buttery and briny. 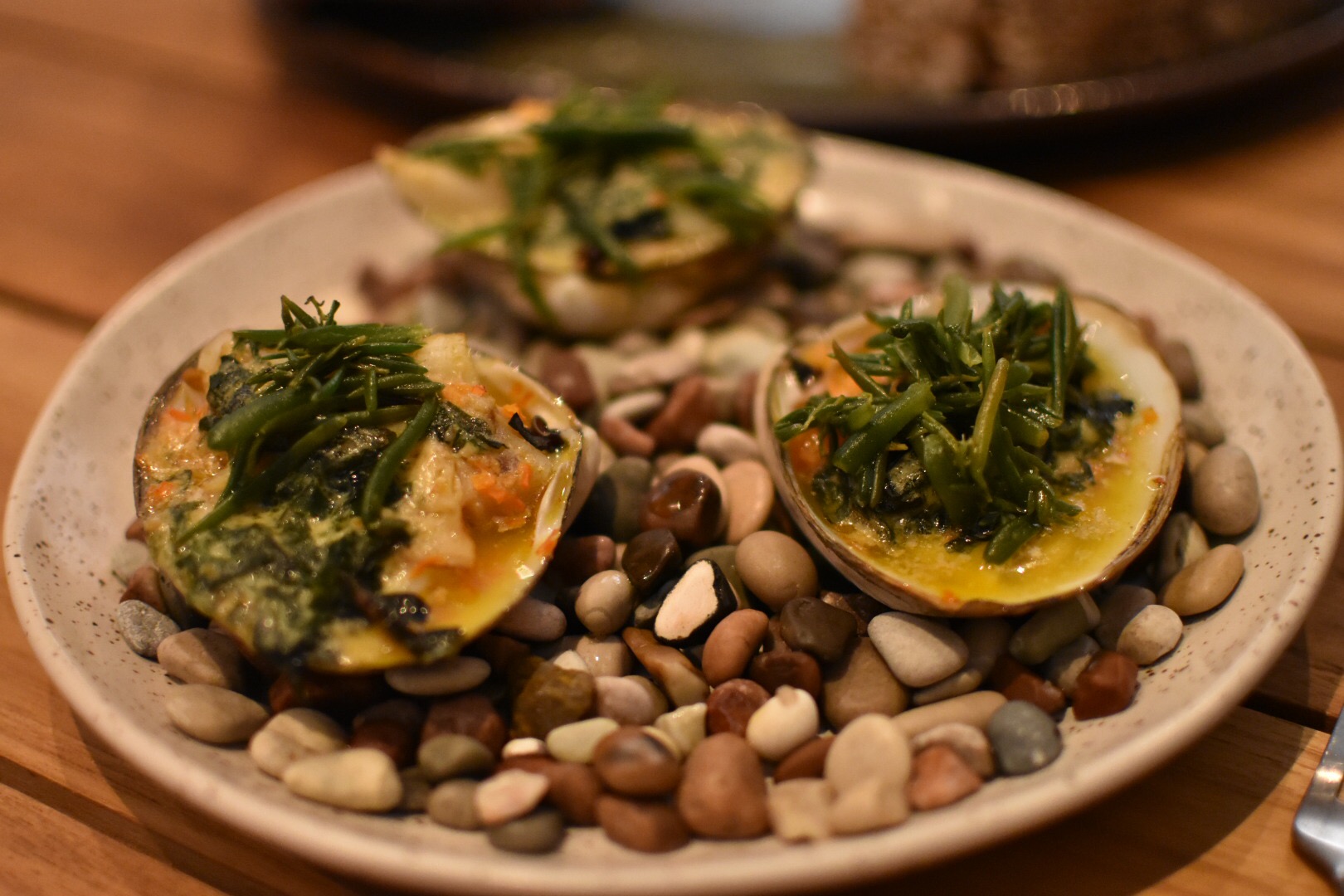 Other options include venison loin with shimeji mushrooms and Jerusalem artichokes, and salt-baked celeriac with sauerkraut and smoked whisky butter.

For something a little larger – to assuage a Thor-sized hunger – the protein-focused carvery offers diners four options: bird, beast, fish and veg.

Our beast (grass-fed short rib with caramelised brussel sprouts and braising juices) was as tender as a battered Englishman after a good seeing-to by a hulking member of the great heathen army. 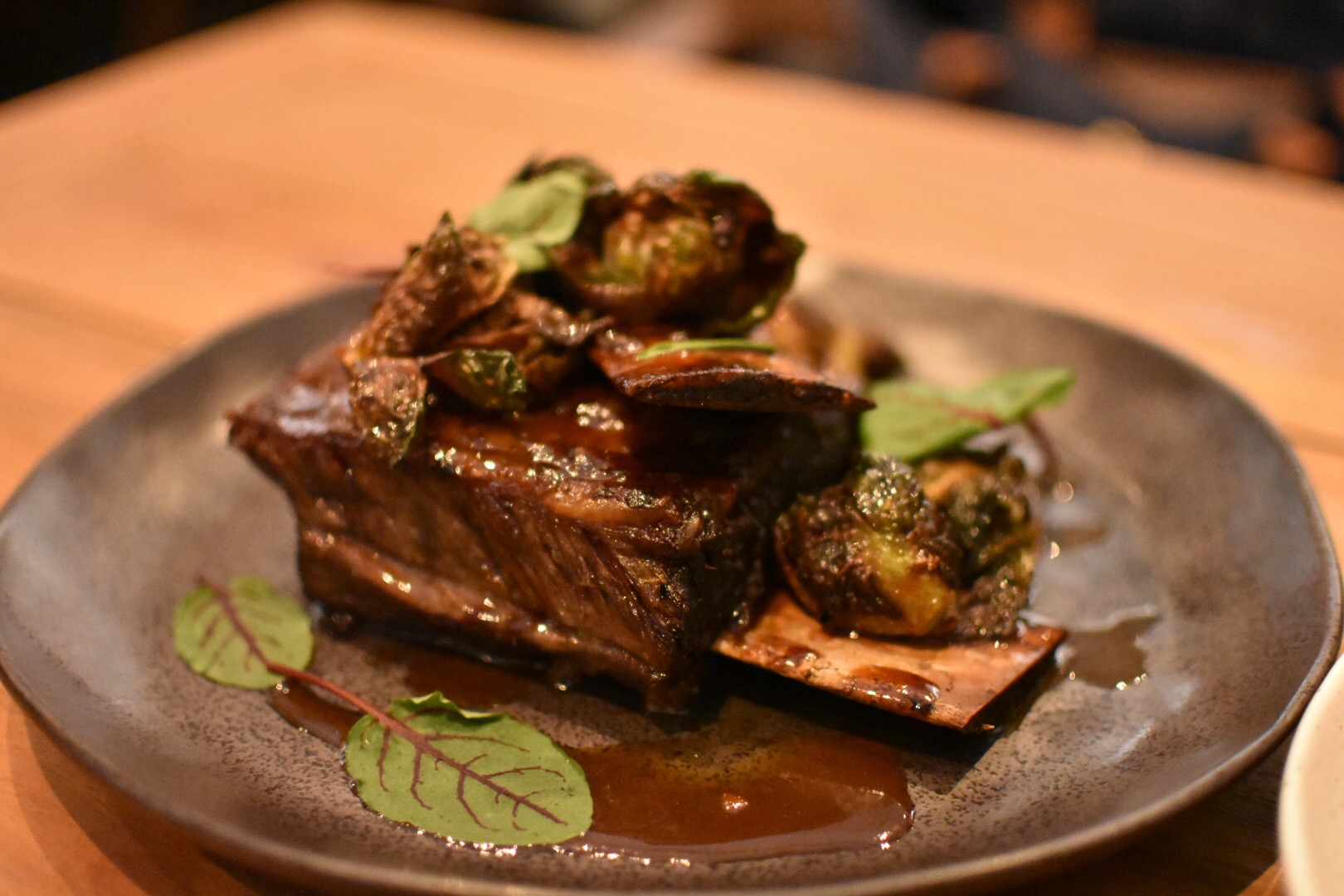 The meat dripped right off the bone and was giddily washed down with a hornful of mead. 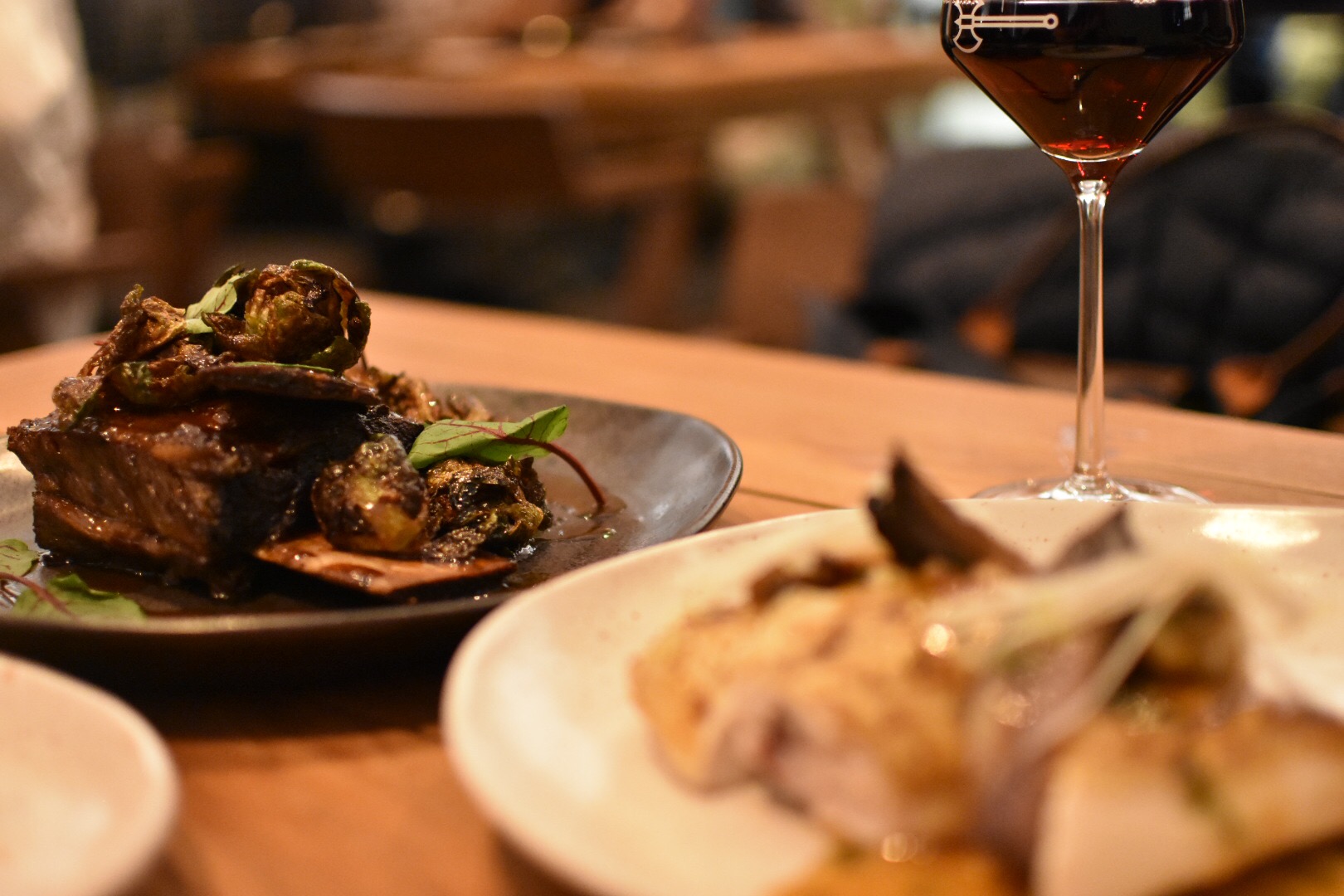 I must say though, it’s not the cheapest restaurant in town (perhaps they’re going for authenticity by charging Scandinavian prices?) with meaty mains ranging from $36 to $60.

And it’s probably not the place to dine if you’re planning on having an intense deep and meaningful as the music is pitched at a volume akin to a Viking battle cry.

But these things aside, the folk at Mjolner have certainly cracked the Norse code. 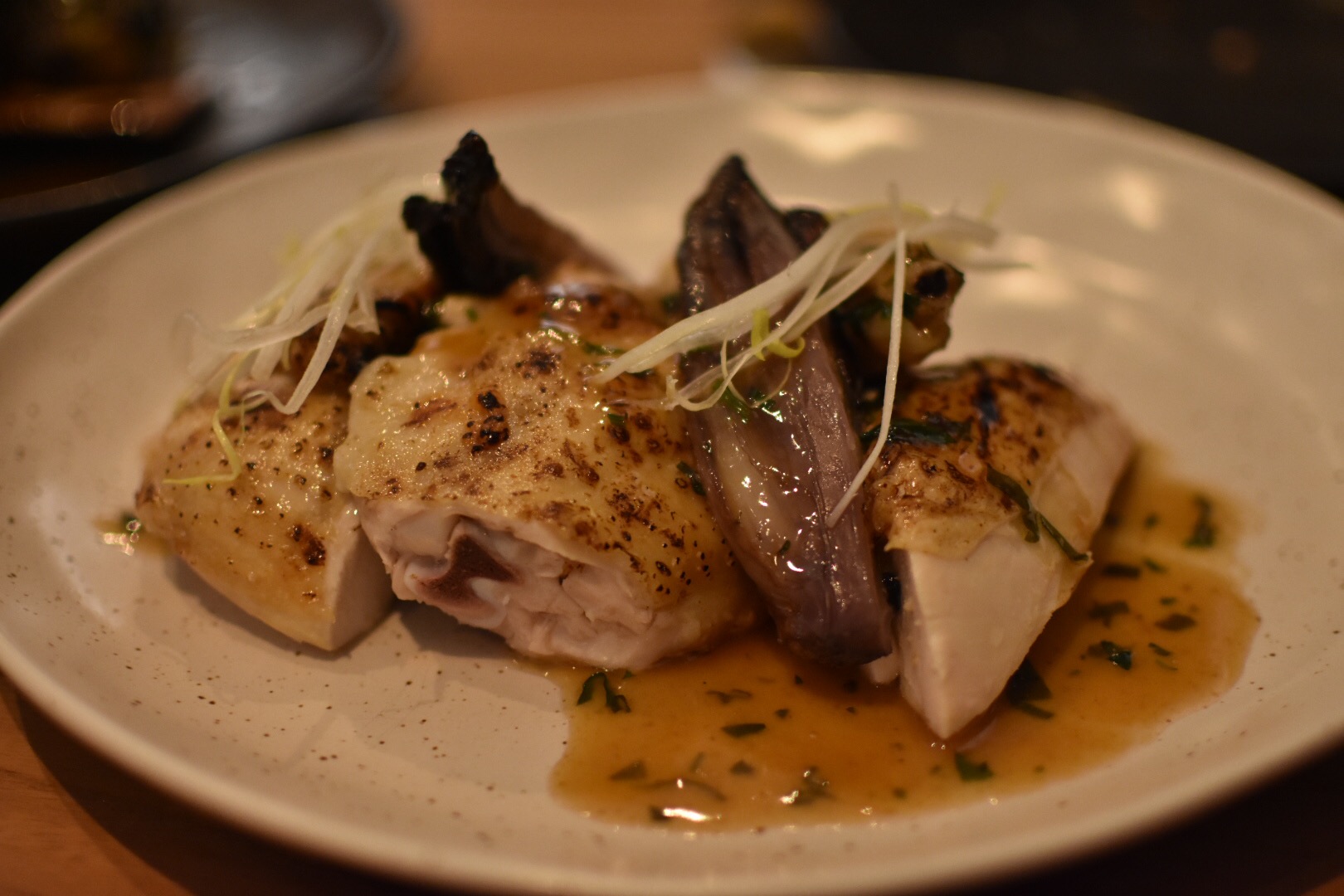