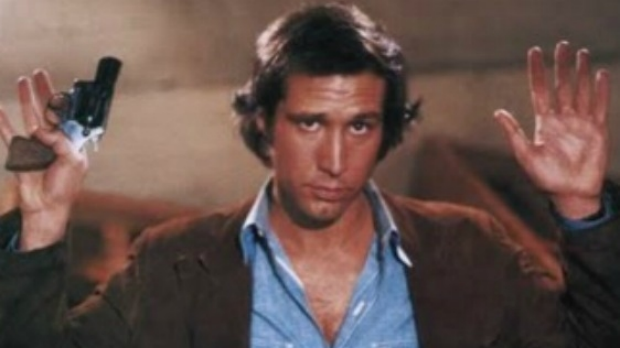 Delightful Hitchcockian mystery-comedy-thriller with Goldie Hawn, Chevy Chase, Dudley Moore, Burgess Meredith, Rachel Roberts and Brian Dennehy of a shy San Francisco librarian and a bumbling cop who fall in love as they try to avoid being murdered while trying to solve a crime involving albinos, dwarves, kidnapping, assassination and the Catholic Church.

Intelligent, respectful, sparkling and brisk screenplay and refreshingly taut direction by Colin Higgins, whose screenwriting credits include the cult classic Harold & Maude and Silver Streak, and went on to write and direct the comedy classic Nine to Five and Best Little Whorehouse in Texas.

Oscar winner Goldie Hawn and Chevy Chase in his first big screen starring role are right at the top of their game, however, the real scene stealer is comic great Dudley Moore in a slide-splitting laugh-out-loud performance as the sex crazed Stanley Tibbets, which introduced him to U.S. audiences and led him to his starring roles in the classics ’10’ and ‘Arthur.’

Watch out for the two old ladies playing scrabble, two Japanese tourists trapped in the back of a limousine during a hair-raising car chase, in an affectionate nod and a wink to the car chase in the Steve McQueen 1968 classic Bullitt, and the punch-up between veterans Burgess Meredith and Rachel Roberts, these are more of many other jewels of hilarity in the crown overflowing with gem standout music score by Charles Fox features the now classic hit songs ‘Ready To Take a Chance Again’ and ‘Copacabana’ sung Barry Manilow, and the Bee Gees landmark chart-topper ‘Stayin’ Alive.’

Brilliantly parodies a number of classic Alfred Hitchcock films including The Man Who Knew Too Much, Dial M For Murder, Rear Window, Psycho, and more, and the legendary Hitchcock was reportedly intending to sue the studio, until he saw the film, during which he was believed to be uncontrollable with laughter, and subsequently dropped any thoughts of suing.

Add to the mix the supremely orchestrated editing by  Pembroke J. Herring, and you have a wonderfully interwoven and exquisite tapestry of thrills, laughter, romance and excitement that is not only a fitting tribute and homage to one of the greats in the history of cinema, Alfred Hitchcock, but a classic in its own right that stands firmly on its own two feet.