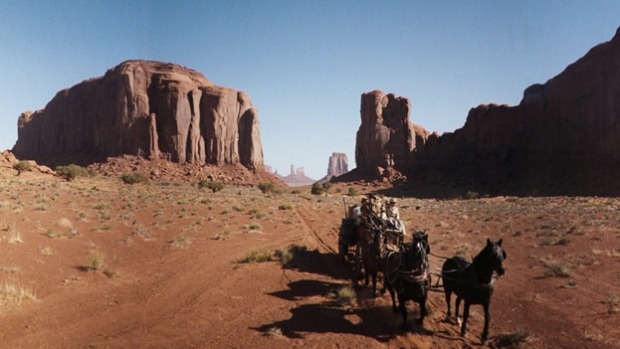 If you were one of the lucky ones to be able to experience it originally on the big screen in the spectacular curved widescreen Cinerama process like I did, you will no doubt agree that it was quite an event.

The Cinerama epic ‘How The West Was Won’ was released at The Plaza Theatre in Collins Street, Melbourne, in January of 1963, and even though a lot has happened in cinema since then, it still has that feel of wonder about it.

‘How The West Was Won’ has undergone a remarkable make-over for its home entertainment release with fully restored picture and remastered roof raising sound, and is now available in a three disc special edition DVD and a two disc special edition Blu-Ray set, like never before.

Long before Imax and the endless list of big screen processes were a twinkle in a projectors lens, audiences were lured away from TV screens and back into cinemas when the screen exploded to an unimaginable size with the first presentation in 1952 with the feature length epic ‘This is Cinerama.’

Cinerama was presented by three separately joined and projected panels to form one giant image on the screen, so wide in its presentation that you had to physically turn your head and travel across from one side of the screen to the other, and some cinemas even went to the length of installing swivel chairs.

It was produced independently away from the Hollywood studio system and cinemas had to be built or converted at great expense to present this new widescreen wonder, including every state in Australia.

Cinerama became an immediate sensation, but it would not be until 1962 when they would move into non-documentary feature films, and the epic all-star-cast western ‘How The West Was Won’ was born.

Right from its opening frame, to the thunderous and awe-inspiring music score by Alfred Newman, the simple story of three generations of western pioneers sweeps you up and carries you through the vast landscape of the early west and pioneering cinematic age with jaw-dropping results.

The original Cinerama process did have a flaw, and that was the two visible joins on the screen that made up the three single panels across to create the monumental image for the curved screen, that is, until now!

Thanks to present day technology, and a budget to match the original cost of making the film, ‘How The West Was Won’ has undergone a breathtaking restoration and transformation, and is now presented for the first time in a way that would have once never thought possible.

The DVD and Blu-Ray both list a host of special features, including audio commentaries and the original Cinerama theatrical trailer.

The icing on the cake for movie buffs on both releases is the must-see ‘Cinerama Adventure,’ a hugely entertaining feature length documentary on the history of Cinerama, which I recommend to be watched prior to the feature film itself.

Exclusive to the Blu-ray edition is a second version of the film in the ‘Smilebox’ format, a curved screen presentation of the epic film to replicate the way it was originally presented on the giant curved Cinerama widescreens around the world over five decades ago.

This is one of those defining moments in cinema between the marriage of a new technology and entertainment that has rarely been surpassed.

The enormous scope of ‘How The West Was Won’ does suffer on smaller screens, but the groundbreaking restoration and additional features on the special edition DVD and Blu-ray releases make this Oscar winning epic as rousing and entertaining as the day it was released.

This is an event to be re-lived by many who have already experienced it, and something for whole new generations to experience for the very first time, a trip well worth taking back to where the future of modern cinema began.