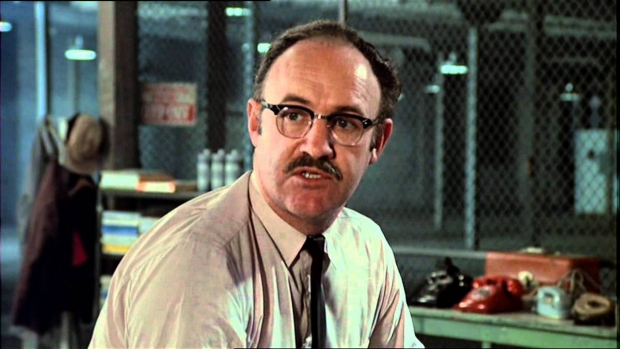 A crowning cinematic achievement from multi-Oscar-winning filmmaker Francis Ford Coppola of a paranoid and obsessively-secretive and guilt ridden surveillance expert who mistakenly becomes involved in a case when he suspects that a couple he is spying on will be murdered.

A chilling, highly atmospheric and compelling look into invasion of privacy, a study in paranoia and many other disturbing levels that are frighteningly relevant more-so today than it was in 1974.

As one of the most tragically obsessive characters ever brought to the screen, Oscar winner Gene Hackman gives an intensely dynamic tour de force performance as the troubled and mysterious surveillance expert Harry Caul, a role which Gene Hackman paid strong homage to in Tony Scott’s ‘Enemy Of The State’ in 1998.

Oscar nominated for Best Picture, Best Sound and Best Original Screenplay by Coppola, the supporting cast includes John Cazale, Allen Garfield, Harrison Ford, Frederic Forrest, Cindy Williams and Teri Garr, all at the top of their game and each bringing an individually unique and finely tuned emotional balance as they weave a part of the complex web of mystery, deceit, loneliness, intrigue, paranoia and murder.

Filmed entirely in San Francisco by veteran cinematographers Bill Butler (Jaws) and an uncredited Haskell Wexler (In The Heat of the Night), the city is a character all to itself, shown in a way unlike anything before or since in cinema, stark, dark, brooding and unforgiving.

In an unprecedented series of achievements in the nine short years between 1970 and 1979, Francis Ford Coppola penned and won the Oscar for his screenplay of ‘Patton,’ penned ‘The Great Gatsby’ with Robert Redford, produced ‘THX 1138’ and ‘American Graffiti’ for George Lucas, executive produced ‘Paper Moon’ for Peter Bogdanovich, penned the screenplay (with Mario Puzo) and directed ‘The Godfather,’ wrote the screenplay (again with Mario Puzo), produced and directed ‘The Godfather: Part Two,’ co-wrote (with John Milius), produced and directed ‘Apocalypse Now,’ executive produced ‘The Black Stallion,’ was nominated for 12 Academy awards, winning five along the way.

He has excelled again with this gripping psychological thriller, and as a result not only created an additional personal best, but a multi layered tapestry of filmmaking and storytelling excellence that remains one of the great landmark classics of 1970’s cinema!