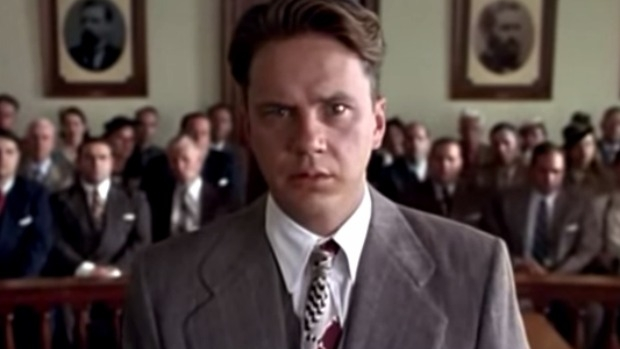 When I first saw ‘The Shawshank Redemption’ back in 1994, I was convinced that was the one to win the Academy award for Best Picture and be the hit sensation of the year, and even though I wasn’t the only one, I was wrong.

Little did I know, it would almost immediately upon its cinema release join the ranks of those many now classic movies were originally box office bombs, Frank Capra’s ‘It’s a Wonderful Life,’ Orson Welles’ ‘Citizen Kane’ and Ridley Scott’s ‘Blade Runner’ are just three of many that stumbled at the starting post.

I was puzzled by its box office failure, even after seven Academy award nominations, including Best Picture, and many others including the Golden Globes, the Screen Actors Guild awards, the National Board of Reviews, and so on.

But then something happened, even more unexpected was the extraordinary and unprecedented resurrection it would experience less than a year after its cinema release on home video, eventually rising to unimaginable heights thanks to a rapidly and continuously growing legion of fans due to word-of-mouth to this day, and would even surpass the aforementioned classics on public polls around the world.

Screenwriter and director Frank Darabont’s ‘The Shawshank Redemption,’ started life as the short story ‘Rita Hayworth and Shawshank Redemption’ by Stephen King from the 1982 book ‘Different Seasons,’ which also features the short stories ‘Apt Pupil,’ ‘The Breathing Method’ and ‘The Body,’ filmed as the acclaimed ‘Stand By Me’ by Rob Reiner in 1986.

Like the character driven movie classics of the 40’s and 50’s, most notably Frank Capra’s ‘It’s a Wonderful Life’ and ‘Mr. Smith Goes To Washington,’ Darabont’s striking screenplay lifts each individual character from the written page and right through the screen with a uniquely powerful, respectfulness, richness and sensitivity unlike anything before or since in cinema.

This is an extraordinary achievement from relative newcomer and all round confessed cinephile Frank Darabont, who made his big screen directorial debut with ‘The Shawshank Redemption,’ and whose previous credits include the screenplays for the schlock horrors ‘A Nightmare on Elm Street 3: Dream Warriors,’ the 1988 remake of ‘The Blob,’ and such TV fare as ‘Tales from the Crypt’ and ‘The Young Indiana Jones Chronicles,’ and making his TV directorial debut with the rarely seen ‘Buried Alive’ in 1990.

Beginning in 1947 and spanning four decades, ‘The Shawshank Redemption’ is a drama of wrongful imprisonment, brutality, friendship, hope and ultimately redemption.

Tim Robbins’ character of Andy Dufresne, a well-to-do banker convicted and sentenced to two consecutive life sentences at Shawshank State Penitentiary for the murder of his wife and her lover, is also richly born of celluloid history.

His journey and ultimate destiny are foreshadowed in the great mythological movie tradition from the moment he arrives at Shawshank penitentiary.

Morgan Freeman’s long serving Ellis Boyd ‘Red’ Redding says of Andy soon after his arrival: ‘He had a quiet way about him. A walk, a talk that just wasn’t normal around here.’

And he’s not the first, Clint Eastwood made a career out of the classic cinematic mythic figure, and others include Alan Ladd as ‘Shane,’ Lee Marvin as Walker in John Boorman’s ‘Point Blank,’ Charles Bronson in Sergio Leone’s ‘Once Upon a Time in the West,’ Peter Sellers in Hal Ashby’s ‘Being There’ and Jack Nicholson in ‘One Flew Over The Cuckoo’s Nest,’ to name a few.

Morgan Freeman shines as ‘Red,’ who forms an unlikely bond with the mysterious Andy and narrates the story in the first person, giving the texture an overall, almost spiritual surrealism, reaching emotional levels that resonate to the very core of the heart, and eerily reflective of Henry Travers’ ‘Clarence’ in Frank Capra’s ‘It’s a Wonderful Life.’

Rounding out the stellar cast are Bob Gunton as the brutal Warden Norton, Clancy Brown as the sadistic prison Captain Hadley, William Sadler as Heyward, and an unforgettable role and performance by veteran actor James Whitmore as Brooks Hatlen, in one of the most heartbreaking characters and tragic sequences ever put on film.

Another star of looming power is the gothic landmark of Shawshank penitentiary, originally known as Mansfield Reformatory or the Ohio State Reformatory, a towering structure that seems more likely born from the pen of Bram Stroker as a stately home of Count Dracula, a atmospheric shrill inducing architectural monolith occupied by ghosts of its past who walk and haunt its cells and corridors, striking fear at its most intense.

This is a place where the system of institutionalisation and life become a mirage, or even a threat, as so perfectly depicted in the case of Brooks, to quote: ‘the ghost in the machine of ‘The Shawshank Redemption,’ a cinematic apparition who exists primarily as a warning to those around him.’

For those who have not seen it, I hesitate to journey too far into the story and the characters, and it must be said that I also hesitate to call it a ‘prison-drama,’ like I also don’t believe ‘Cabaret’ is a ‘musical.’

In 1998, it was not even listed in the American Film Institute ‘100 Years…100 Movies,’ list, but nearly a decade later it was #72 on the revised list, outranking both Forrest Gump (#76) and Pulp Fiction (#94), two most critically acclaimed movies from the year of the release of ‘The Shawshank Redemption.’

Readers of Empire magazine voted the film as the best film of the 1990’s and place it #4 on their ‘500 Greatest Movies of All Time’ list, and the ‘Writers Guild of America’ have placed Frank Darabont’s screenplay #22 on the 101 Greatest Screenplays list.

Even more remarkable is that ‘The Shawshank Redemption’ on the public user IMDb (Internet Movie Database) top 250 films has been #1 since 2008, breaking even with ‘Francis Ford Coppola’s ‘The Godfather,’ and beating out such others as ‘Citizen Kane,’ ‘Star Wars,’ ‘The Godfather: Part II,’ ‘Schindler’s List,’ ‘Casablanca,’ ‘Apocalypse Now’ and Alfred Hichcock’s groundbreaking ‘Psycho.’

I only have one almost inconsequential gripe about ‘The Shawshank Redemption,’ which is why I give it four-and-a-half stars and not five, but that’s another story.

Ultimately though, ‘The Shawshank Redemption’ has been a modern allegory for personal and spiritual salvation to so many, it is a thrilling, poignant and haunting drama that never fails to capture your heart and imagination, with no matter how many viewings.

‘The Shawshank Redemption’ is a pristine 1.85:1 widescreen transfer on Blu-Ray and DVD as a Special Edition with a host of features including: Audio Commentary by Writer-Director Frank Darabont, Two Documentaries, Still Galleries and the original Theatrical Trailer.