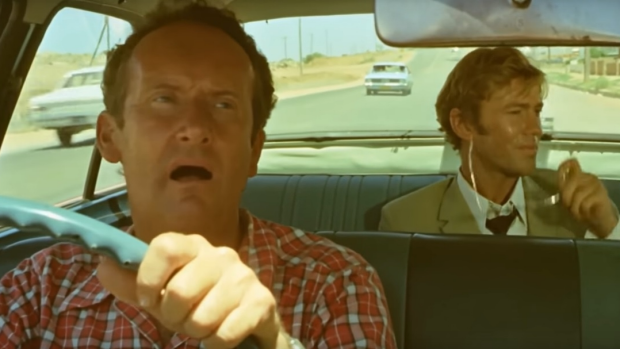 Here is a film that has captures the Australian outback with an unrelenting intensity unlike anything made in Australia before or since its original release nearly five decades ago, and remains a powerful testament to a lost identity in an all too rapidly changing landscape.

British actor Donald Pleasence stars as ‘Doc’ Tydon, a ghost of a man who has surrendered to a place and elements where time and people ask no questions, gives one of the most compelling performances of his long, diverse and distinguished career.

U.K. character actor Gary Bond co-stars as an ill-fated outback teacher plunged into darkness as he becomes trapped like a fly in a spiders web in the fictitious country town of Bundanyabba on his way to Sydney.

The outstanding Australian cast includes Jack Thompson in his screen debut as an out a town rouge you just know is going to be trouble, along with Aussie stalwarts John Meillon and then TV personality, Buster Fidess, but it is legendary Australian icon Chips Rafferty in his final screen role as the town cop that exudes an unnerving intensity with a deceptively menacing and disturbing performance that ranks high amongst the best of his career.

However, the real star of ‘Wake in Fright’ is the Australian outback itself, the heat and sweat flow off the screen like torrential downpour for every frame of its 109 minutes, and even with a glimmer of hope on the horizon, a burning tirade of brutality boils silently beneath the stark brooding surface.

Rarely seen since its original release in 1971, the original negative went missing, but it was only after a long search, and a lot of persistence and patience by ‘Wake in Fright’ Editor Anthony Buckley, it was finally found in a warehouse in the U.S.  in a box marked for destruction, and has been stunningly restored and available as a special edition on DVD and Blu-ray.

Canadian director Ted Kotcheff [First Blood] and UK cinematographer Brian West [84 Charing Cross Road] capture so potently what we would normally have taken for granted, and in doing so they have created a film as fierce and brutal as the harsh Australian outback can be at its most unforgiving.

Like the land, the time, the characters and the journey it so vividly depicts, this is no longer the missing link in a chain that has finally joined its long overdue and well deserved place among the all too few truly unique milestones of Australian cinema, and ranking as one of the most important Australian restorations of all time.

Released the same year as U.K. filmmaker Nicolas Roeg’s hauntingly provocative outback odyssey ‘Walkabout,’ starring Jenny Agutter, David Gulpilil, Lucien John (Luc Roeg) and John Meillon, as to what kind of film ‘Wake in Fright’ would have turned out to be with and all Australian cast and crew we will never know.

But one thing we do know for certain, and that is that it has been to the advantage of Australian and world cinema that a Canadian director and a UK cinematographer ultimately helmed such a deeply rooted and provocatively intense Australian subject matter.

Penned for the screen by Jamaican born, Evan Jones, whose previous credits include the haunting and chilling Joseph Losey classics ‘These Are The Damned’ and ‘King and Country,’ along with the Len Deighton-Harry Palmer spy thriller ‘Funeral in Berlin’ and later the underrated Australian thriller, ‘The Killing of Angel Street,’ it is impossible to imagine the final result being anything else so fiercely driven and less passionate than it is here.

Australia is not the only country to be shown a startling vision of itself.

When U.K. director John Schlesinger and Polish cinematographer Adam Holender went to the U.S. for the first time, it was their fresh and untouched vision that brought to the surface the stark reality too long buried in the dark shadows behind the deceptive facades of a brooding New York that resulted in the searing 1969 Oscar winning classic ‘Midnight Cowboy.’

Originally released in the U.S. and U.K. as ‘Outback,’ ‘Wake in Fright’ is as terrifying, tough, dry and relentless as the red dust and heat of the outback itself.

This is no first date movie, and you most certainly won’t find this being endorsed by the Australian Tourism Commission.

Like such Australian classics as ‘Jedda,’ ‘Mad Max,’ ‘Picnic at Hanging Rock,’ and so many others, ‘Wake in Fright’ stands uniquely on its own.

It is a journey once taken that will leave you, like Scorsese and myself, quite speechless as well, a landmark Australian motion picture masterpiece and experience you will never forget!