SICK SEAS: A Plastic Ocean highlights the damage plastic is doing to our oceans 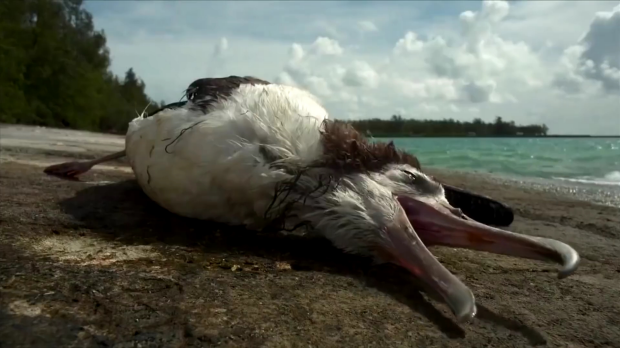 OUR SICK SEAS: The new documentary A Plastic Ocean highlights the appalling damage disposable plastic is doing to our oceans, its wildlife and its people.

Whatever one thinks of the various environmental issues that clamour for our attention – climate change, renewable energy, carbon levels, bio-fuels, melting icecaps, etc – it is hard to imagine anybody not raising at least one eyebrow over the impact half a century of disposable plastic has had on our fragile oceans.

The graphic environmental documentary A Plastic Ocean shows the extent of the damage caused by this pollution.

Peppered with facts and interviews with scientists, the film reveals that extensive surveys by oceanographers have found that vast swathes of the seas are covered with plastic, sometimes as particles, sometimes as milk crates and water bottles.

Though we regard plastic as disposable, its durability makes it virtually indestructible, the flm explains, even after years of exposure to the sun and water. So a disposable cigarette lighter carelessly tossed into the gutter in Melbourne can, a few years later, end up in the middle of the ocean having been carried by giant oceanic currents known as gyres.

That, of course, is if the wildlife that live in and off the oceans don’t encounter it first.

The film shows the horrific cost exacted by this lifestyle pollution. Sealife and sea birds often mistake plastic junk for food. They gradually fill their stomachs with plastic and, because it does not break down, causes the creature to starve to death. Plastic has claimed the lives of everything from small birds to blue whales.

Plastic detritus can also attach itself around an animal, restricting its ability to move and feed, especially if bound around the throat. And the human populations of small islands suffer also, as plastic junk encroaches upon their precious living space.

The film is directed and presented by Australian journalist Craig Leeson and co-produced by Jo Ruxton, who worked with the Natural History Unit at the BBC.

As part of the film she co-founded the Plastic Oceans Foundation to continue the discussion and awareness raised by the film.

In this Skype interview, Ruxton discusses the making of the film and the emotional impact she felt seeing the wildlife killed by plastic. (For more detail about the film, click the link to Part Two of the interview near the end of the video).

A Plastic Ocean is screening at the Nova. It is also available on iTunes, Google Play and at plasticoceans.org.

Please note that some of the imagery in the film as they dissect animals is graphic and might upset some viewers.

Click PLAY to watch the interview with Jo Ruxton

Click PLAY to watch the trailer for A Plastic Ocean