The clean up after yesterday’s massive thunderstorm is under way.

The SES responded to hundreds of calls for help as severe thunderstorms pelted central Victoria yesterday afternoon and evening.

Avalon recorded almost 47mm of rain in the flash storm, as well as wind gusts up to 110km/h.

A massive five metre deep sinkhole opened up in front of a home in Keilor East.

A huge thank you to all our volunteers across Victoria who attended calls for help during a powerful storm system last night.

These action shots are from the Emerald, Essendon and Narre Warren Units 🧡🧡 #thankyouSES #VICSES #volunteers pic.twitter.com/pNrczpaaZk

Kevin Connerly from the SES said emergency crews were called to the sinkhole at about 9pm.

He said investigations are ongoing, but a burst water pipe appears to have caused the massive hole.

“It’s likely that a storm water pipe underneath the surface has broken, washing away the soil and causing the ground to collapse,” he told 3AW’s Dee Dee.

Meanwhile, rain flooded streets in the suburb of St Albans, in Melbourne’s north-west. 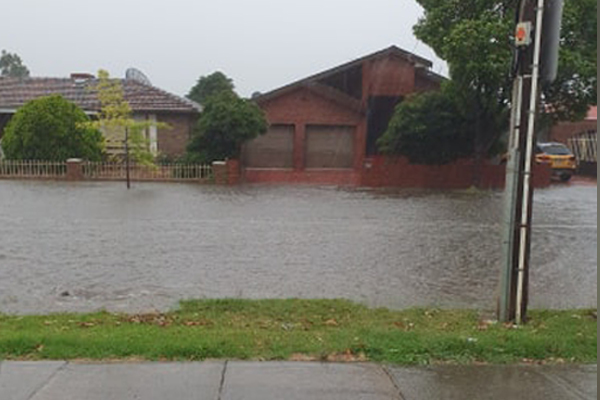 Andrew Crook from the Department of Transport told 3AW’s Tom Elliott there were many reports of people caught in floodwaters, branches and trees falling down, and collisions.

“Please take care, slow down, be vigilant and stay away from the floodwater,” Mr Crook warned.

“If you can’t see the road surface you don’t know what’s down there and there could be hazards.”

Listener Amanda sent footage of the downpour on the Princes Highway between Geelong and Melbourne (below).