#EatCuriously: help yourself to sambal ijo (green chilli), if you can handle heat

If you like this: try Tambo Ciek in Carlton, Salero Kito in the CBD and Dale La Pau in Camberwell (all serve Minangnese food from the native Minang ethnic group in West Sumatra).

Indonesian food is the most underrated Asian cuisine. Australians think of it as nasi goreng and not much else, but there’s a huge array of dishes depending on which part of the country you’re in. After all, the archipelago is made up of more than 17,000 islands.

Enter pempek, a traditional fish cake made with tapioca flour from Palembang city in South Sumatra. The story goes that an old Chinese immigrant saw locals catching an abundance of fish on the Musi River. Instead of grilling it like the others, he combined it with spices and tapioca flour, and then cruised around on his bike selling them. People referred to him as pek-apek, where apek is a Hakka Chinese slang term for an old man, which is where the pempek – also empek-empek – gets its name. 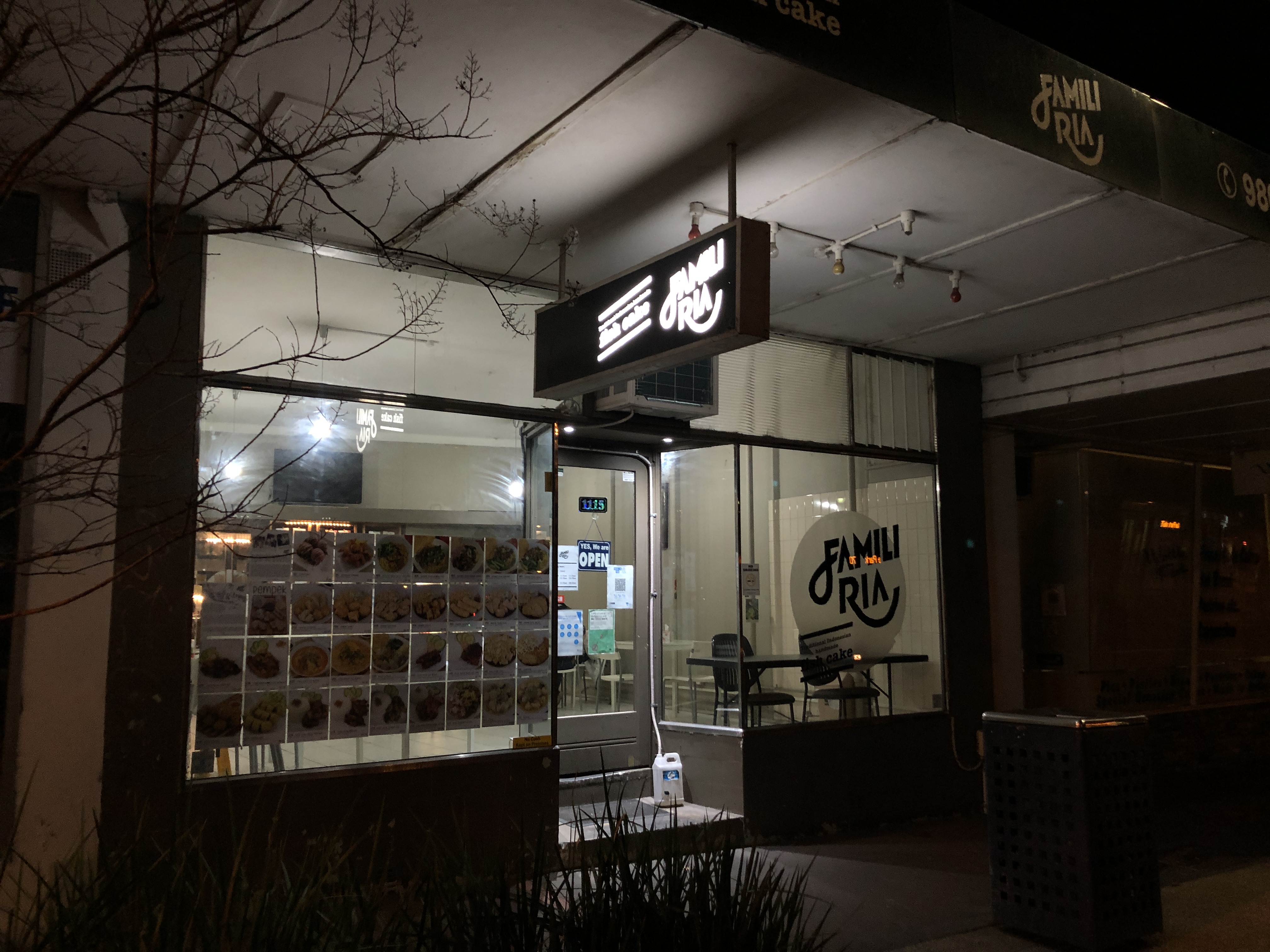 I asked an Indonesian friend where to find the best pempek, and he directed me to Famili Ria on the corner of Elgar and Riversdale Roads opposite Wattle Park in Surrey Hills. This is about as frilless as a no-frills restaurant gets. Familia Ria is all stark white tiles, plastic chairs and melamine bowls in primary colours, but you’re here for the pempek, handmade daily by Hana The. She used to make them back in Indonesia and opened Famili Ria with her three sons.

Gio Tondas, Hana’s eldest, told me that she’s a perfectionist who refuses to teach anyone the recipe for fear they won’t be as good. Even when the kids give it a crack, she takes the fish paste off them and adds extra flour, getting just the right amount by feel alone. As a result, Gio estimates that his mum makes 1000 pempek a week by herself.

There are six varieties all up. The most impressive is the kapal selam, which translates to submarine. It’s a beast of a thing that sees a whole boiled egg covered in the fish paste (made with spanish mackerel), boiled and then fried. 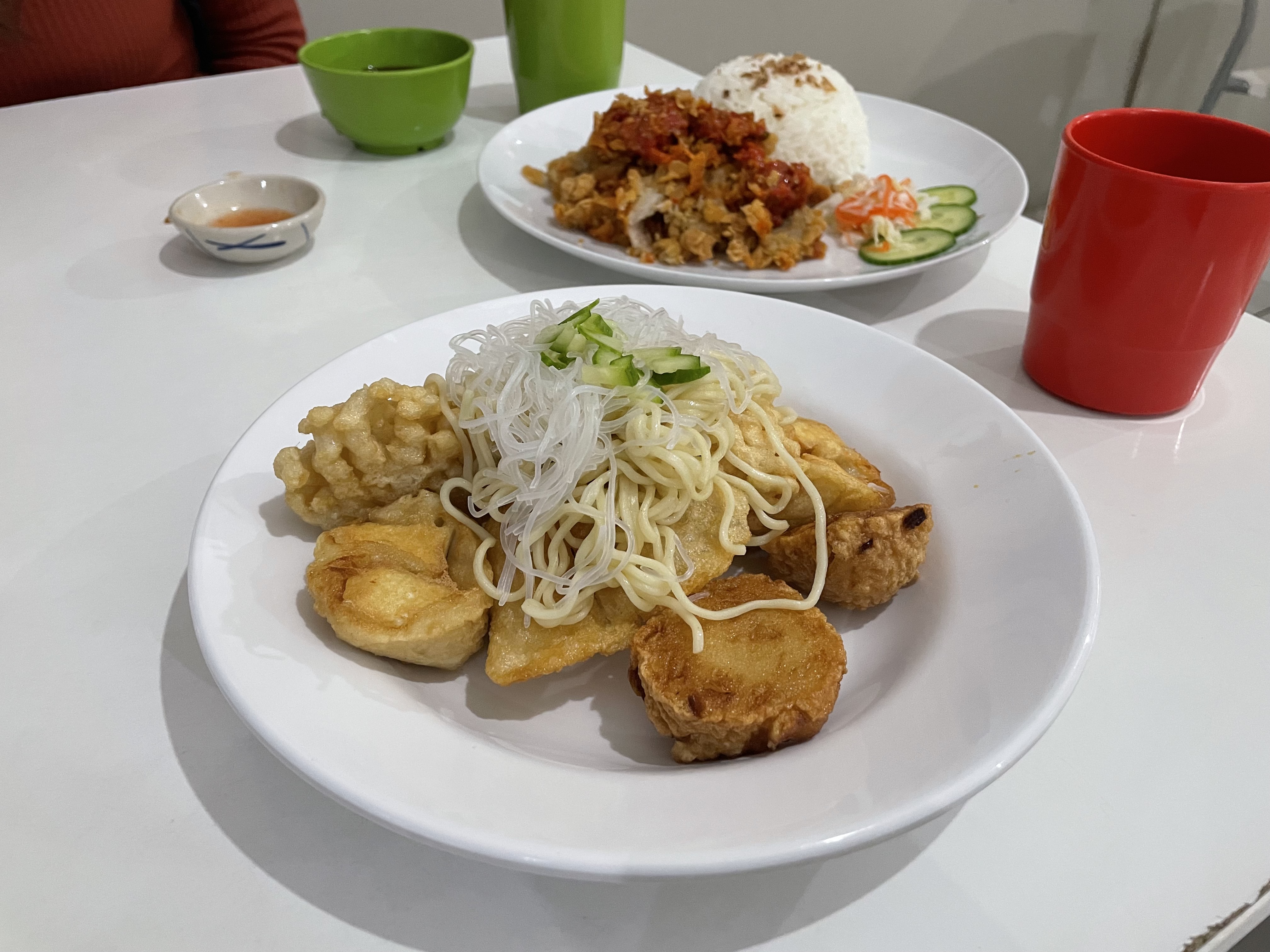 Telor cecil is a smaller version, and one of five varieties that comes on the pempek sampler. There’s also panjang (shaped like a sausage), bulat (shaped like a ball), keriting (curly fish cake) and tahu (stuffed with tofu). They all come with two types of noodles, fresh cucumber and cuko, a vinegar-based sauce mixed with sugar, chilli, garlic, salt and water. This one’s also spiked with dried shrimp for extra umami.

There’s more than pempek on the menu. We were starving upon arrival and ordered snacks. Well, more accurately my mate helped herself to a $3.50 bag of garlic-flavoured krupuk, a starchy cracker with a similar texture to prawn crackers that are just as moreish. I adore the word krupuk, an onomatopoeia that refers to the crunch of the snack. We also tried oversized, hollow “meat balls” made with chicken and prawn that tasted like chicken skin.

Bakmi is a noodle dish that’s usually eaten for breakfast with broth served on the side. But we couldn’t resist nasi ayam goreng sambal, fried chicken smashed flat, deep-fried and smothered with a chunky, garlicky red chilli sambal. Our friendly waitress also recommended the Medan-style chicken curry, which we had with vermicelli noodles. The gravy looks like lava but is mild thanks to a creamy milk base. It’s also chock-full of spices like cumin and ginger; I found myself spooning it into a bowl with rice and noodles to gather the dregs. 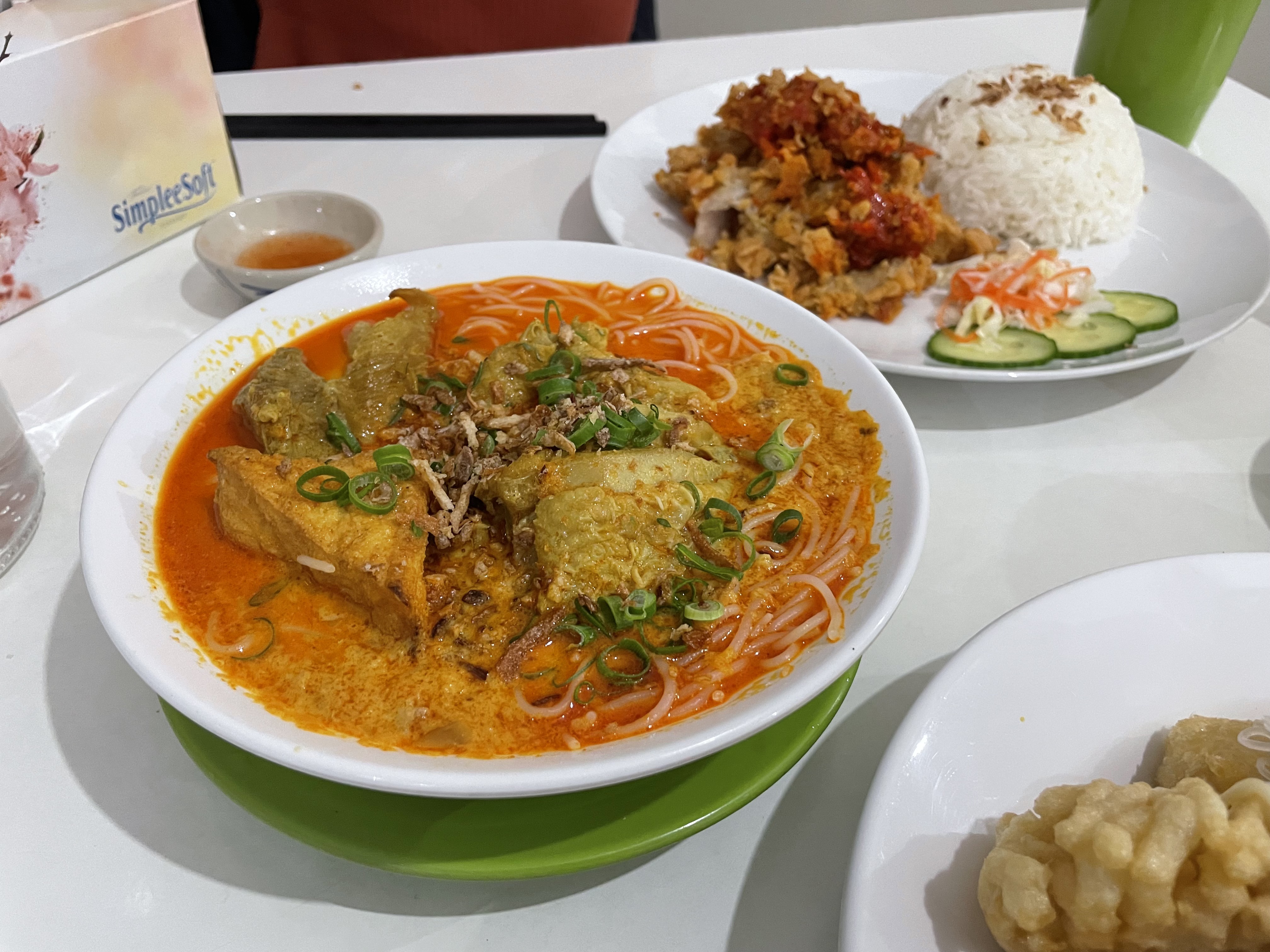 If you get a kick from a kick, help yourself to the self-serve sambal ijo, a chilli sauce made from green bird’s eyes that is bloody hot, even for chilli fiends like me. The most you’ll pay for a main here is $12.50. Only the pempek sampler is priced a little higher at $17.50.

There’s not much in the way of dessert, a few homemade plastic containers of cookies on the counter. We tried near-spherical pineapple cookies with a jammy filling that reminded me of fig cookies.

Gio says that in the first year of operation back in 2013, Famili Ria only served Indonesian customers. These days, the restaurant has a big Malaysian following, but most of the Aussies who visit live nearby. Don’t let them have all the fun.