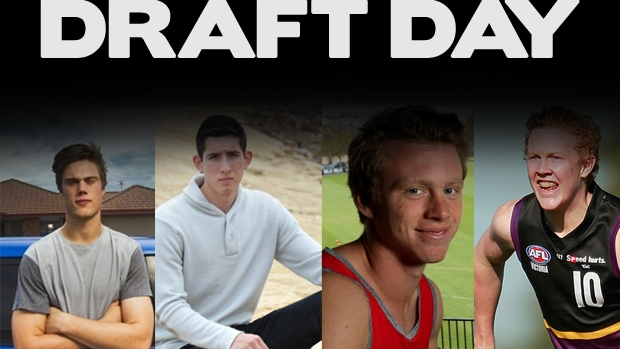 A defender who is able to play both ends of the ground, reads the play well and takes intercept marks. Likened to Harry Taylor and he will play in season 2016 for the Blues.

LISTEN: Jacob Weitering with Shane McInnes after being selected at number 1.

A massive 199cm key forward, who can also go through the ruck. A beautiful kick for goal who was awarded the Larke medal for the best player in the Under 18 championships, where he kicked 24-goals.

LISTEN: Shane McInnes caught up with Josh Schache after he was selected by the Brisbane Lions.

Highly rated inside midfielder, who could have easily gone at number 1.

The 2015 Morrish Medalist who had injuries at the start of the year. A massive bolter in this year’s draft, as he was not even in the Vic Country side.

LISTEN: Shane McInnes with Clayton Oliver after being selected by Melbourne.

Small midfielder with pure football skills. His two seasons at under-18 level were really impressive.

LISTEN: Darcy Parish with Shane McInnes at the draft after being selected.

A tall defender who has played senior football in the SANFL. Reads the play ahead of him really well and can take a strong mark in defence.

Really lively both on and off the field. He is tough as nails and likes to run with the ball in his hands.

Brother of Brendon from Port Adelaide, Callum showed his tricks throughout the season, including a massive hanger at the MCG.

LISTEN: Callum Ah Chee joined Shane McInnes after he was selected by the Suns.

Melbourne were right in to him from the get go. He is a strong marking forward, standing at 196cm.

LISTEN: Sam Weidemen with Shane McInnes after Melbourne selected him at number 9.

LISTEN: Harry McKay with Shane McInnes after being selected by Carlton

Quick, classy and a good finisher.

At one stage he was touted as a top-10 pick. Had an off-field incident last week which he will have to deal with, however he is said to have a good family and support around him. Will join his brother Ed at the Blues.

A country boy who already has plenty of meat on him (which he needs for the way he plays). Inside midfielder who can use it well.

He was outstanding on Grand Final day at the MCG for the AFL curtain raiser. Followed that up with a brilliant combine, posting high results all across the board. Plus, his last name is Rioli!

A big surprise, with many thinking he would be selected late in the second round.

LISTEN: Ryan Burton joins Shane McInnes after being selected by the Hawks.

See highlights of Kieran Lovell below.

Midfielder who continues to get his hands on the football every week.

Son of Andrew, who nominated Sydney last week for the father-son bidding system. Sydney opted not to match the Bulldogs pick, and the Bulldogs are said to be rapt with him joining the club.

Big-sized defender who is extremely driven prides himself on defensive pressure and keeping his opponent quiet.

A forward with a lot of tricks up his sleeve and knows where the goals are.

A 193cm forward with strong hands.

The ruckman is said to be really likeable off the field by all of his team-mates.

Son of Dean. He chose St Kilda over the Blues. Plays in midfield and defence.

The former Cat played 15 games between 2011-2014, before being delisted. He spent season 2015 playing at Sandringham and had a brilliant overall season, including a dominant finals series.

A 19 year old who benefited from tha TAC rule allowing upper age players to be on a TAC Cup list.

A late call up to play for Allies on Grand Final day, which excited some recruiters.

A midfielder who had a very impressive draft combine, mainly with endurance.

26-year-old mature age recruit who is ready made with some quality leg speed.

A tall, solidly built tall forward. He has strong hands and is also a quality cricketer.

He has spent time on Collingwood’s list and had a brilliant last couple of seasons with Coburg in the VFL.

He discussed how Essendon has full access to the AFL Draft for the first time since 2012, due to the supplements scandal.

Essendon have four picks in the first two rounds and Kerr says their selections will be determined by what Melbourne do with a pick before them.