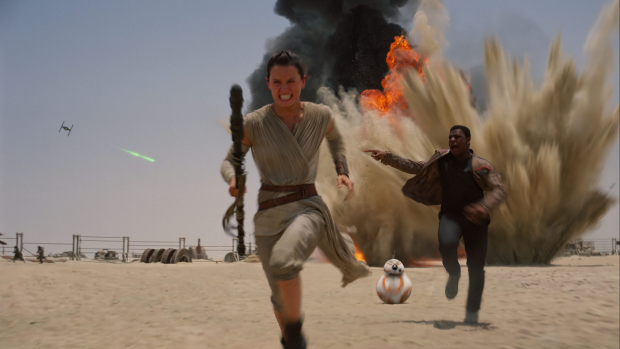 Click play to hear Jim Schembri give one of the first ever reviews of Star Wars: The Force Awakens to Bruce Mansfield and Simon Owens on 3AW Nightline.

Those expecting something akin to a religious experience while ingesting the latest Star Wars film might find themselves a tad short-changed and disappointed, a reaction that can be squarely blamed on the massive anticipation roused by the double-saturation level of marketing that has been mercilessly inflicted on the public throughout the year.

That said, as a straight-up piece of space opera escapism designed to extend the franchise (which began in 1977), the film does a fine enough job, with director JJ Abrams – the perfect director for the task given his success in reviving the Star Trek movie series – doing an efficient, if unexceptional, job steering the behemoth to a sufficiently satisfying end point designed, of course, to lead immediately into the next film.

Set about 30 years after the events in 1983’s Return of the Jedi, we find that nothing much has changed in the Star Wars universe. The evil Empire is now called the First Order (an all-too-obvious Nazi reference) and the Rebellion is now The Resistance, with Princess Leia now a fatigued, fatigue-wearing general.

The Force – that handy telekinetic power that can be harnessed for good or evil – still exists, but the adventures chronicled in the first three films have now faded into questionable folklore and the Jedi are all but gone.

The legendary Luke Skywalker has long disappeared from the scene, yet his rumoured existence presents both hope and threat. If the Resistance can find him he could help revive the Jedi and bring justice back to the galaxy. The First Order bods want him dead for the same reason.

And so the hunt is on, with a weather-beaten Han Solo (Harrison Ford) and Chewbacca (Peter Mayhew) teaming up with Rey (Daisy Ridley), a young scavenger, Finn (John Boyega), a former stormtrooper and BB-8, a spherical droid that contains some important data.

Over on the Dark Side, commanding a flotilla of typically oversized star ships, is the sneering General Hux (Domhnall Gleeson), though the real worry for the Resistance is the masked Kylo Ren (Adam Driver) who is determined to use the Force to continue the work of Darth Vader.

There’s a lot of story to burn through here and, consequently, Star Wars VII is surprisingly yappy, with almost everybody having something key to contribute to a twist-laden storyline that, to the film’s great credit, contains a few major emotional punches.

So, dramatically, the film does pull some great aces from up its sleeve. These moments, beautifully judged by Abrams, are ultimately what make Star Wars: The Force Awakens a worthwhile venture.

Action-wise, however, the film is something of a let down and suffers in comparison to its predecessors, including the prequels.

There are the usual dogfights between X-Wing and TIE fighters but, to be honest, they are dispatched with the all-too-standard combination of crash zooms, swish pans and rapid edits. If only Obi-Wan could have cursed the sameness into oblivion.

Frankly, there’s no stand-out signature set piece in Episode VII to compare, say, to the trench dive in the original, the asteroid chase in The Empire Strikes Back (1980),  or the brilliant Yoda vs Dooku duel in Attack of the Clones (2002). (Just to name a few.)

No doubt, those young’uns coming to the film fresh will not have the reference base that diehard fans will inevitably use to gauge the film’s quality, and it’s those who know their Star Wars films inside out – even the most adulatory and forgiving ones – who are likely to be most disappointed with the film’s climactic action sequence.

Given how dedicated Abrams and his team supposedly were in delivering a premium Star Wars experience to a global fanbase that now spans four generations, it is hard to rationalise how shamelessly they have relied on rote. Seriously, folks. There are now seven Star Wars films and three of them essentially rerun the final reel. Surely they should have done better. It is the film’s biggest, most glaring failing.

Overall, Star Wars: The Force Awakens does primarily what it was designed to do, which is to assure people that the debacle of The Phantom Menace is a distant memory and won’t be repeated. You can almost hear the collective sigh of relief around the world.

The film also proves what a lot of Star Wars fans have long suspected – that the best thing that could to happen to Star Wars would be to take George Lucas out of it.

As a writer/director Lucas proved with The Phantom Menace that all prior claims to him being some sort of genius or visionary storyteller were unfounded.

Plot holes and narrative inconsistencies in Phantom and, to a lesser extent, Attack of the Clones suggested that Lucas hadn’t sufficiently brushed up on the original trilogy. Only in the third film Revenge of the Sith (2005) did things hold together properly.

For instance, his bizarre reworking of The Force as a bio-chemical rather than a spiritual phenomenon introduced the clumsy concept of microscopic entities called midi-chlorians being the source of this power.

Thankfully, there is no mention of them in Star Wars: The Force Awakens and, if things continue in the direction set here, they’ll never being mentioned again.

And with that should come another global sigh of relief.