President Trump has attended a banquet hosted by the Queen in London after firing off a barrage of angry tweets targeting the city’s mayor, Sadiq Khan.

It wraps up the first day of his three-day visit to the UK. 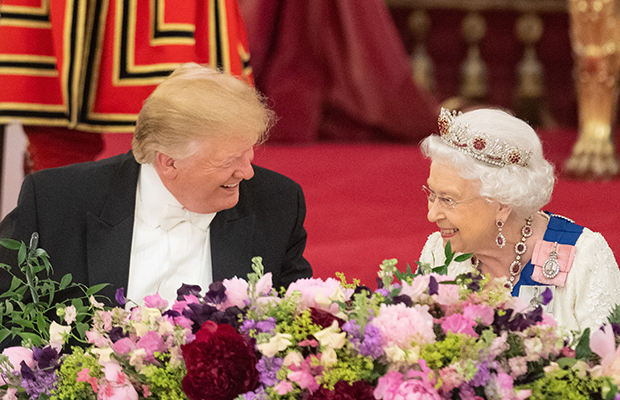 Mr Trump addressed the formal banquet and paid tribute to Queen Elizabeth and Prince Philip and the strong relationship between the UK and US.

“On behalf of all Americans I offer a toast to the eternal friendship of our people, the vitality of our nations, and to the long-cherished and truly remarkable reign of her majesty, the Queen,” he said.

Queen Elizabeth invited guests to rise and toast to the friendship.

“Tonight we celebrate an alliance that has helped to assure the safety and prosperity of both out peoples for decades, and which I believe will endure for many years to come,” she said.

Mr Trump attended the banquet after starting the day with a series of angry tweets in which he called London’s mayor, Sadiq Khan, “nasty” and a “stone cold loser”.

The comments came in response to Mr Khan comparing Mr Trump to “the fascists of the 20th century” in an Observer column.

.@SadiqKhan, who by all accounts has done a terrible job as Mayor of London, has been foolishly “nasty” to the visiting President of the United States, by far the most important ally of the United Kingdom. He is a stone cold loser who should focus on crime in London, not me……

….Kahn reminds me very much of our very dumb and incompetent Mayor of NYC, de Blasio, who has also done a terrible job – only half his height. In any event, I look forward to being a great friend to the United Kingdom, and am looking very much forward to my visit. Landing now!

The Queen, President Trump and the First Lady view a display of items from the Royal Collection illustrating the enduring relationship between the US and the UK. #USStateVisit pic.twitter.com/gPuI5Ziab6