A factory fire in Southbank has forced the closure of South Melbourne Primary School today.

The blaze in a packaging business on the corner of Farrars and Buckhurst streets began just before midnight.

It took firefighters more than two hours to bring under control.

The factory has been gutted and has partially collapsed.

The blaze is being treated as suspicious.

An advice message has been issued for South Melbourne, Southbank and South Wharf, due to toxic smoke.

While there is no damage to South Melbourne Primary School, it is in very close proximity to the blaze and has been closed for the day due to concerns about smoke in the area.

‘It was a packaging company … had a lot of rubber products in it,” he said.

“The smoke was pretty toxic as well.

“We’re going to be on scene here for, I would suggest he majority of the day.”

Press PLAY below for details from Victoria Police 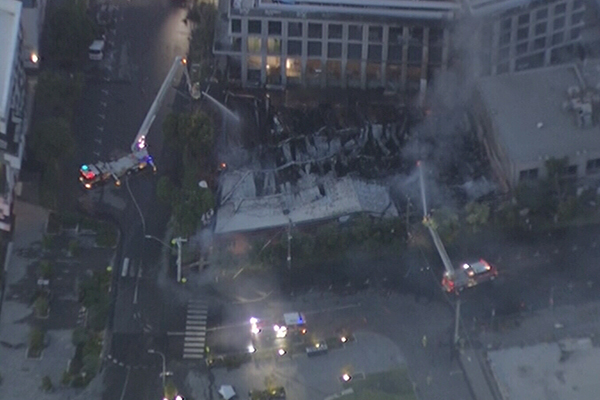 Port Phillip CIU are investigating following a suspicious factory fire in South Melbourne overnight. An arson chemist and detectives will revisit the scene this morning.https://t.co/HxN8GyhxCn pic.twitter.com/di79zxlJHe