A Sydney to Melbourne XPT train has derailed near Wallan, killing two people and injuring many others.

The five-carriage train, which was carrying 160 passengers, came off the tracks about 7.45pm.

The train driver, a 54-year-old man from the ACT, and the train pilot, a 49-year-old Castlemaine man, died at the scene.

12 people were treated at the scene and 12 were taken to hospital with non-life threatening injuries. 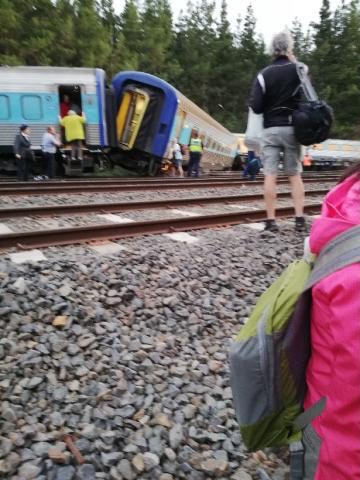 Police are still looking for up to 20 people.

Acting Inspector Peter Fusinato says he expects those people either didn’t board the train or left the scene before emergency services arrived.

The Rail, Train and Bus Union this morning said the crash happened over the section of track that V/Line drivers had banned just this week.

“The Sydney to Melbourne XPT train derailment near Wallan Station last night occurred over a section of track over which was awaiting maintenance,” the union’s state secretary Luba Grigorovitch said in a statement.

“Conditions were altered and V/Line drivers rightly refused to traverse this section over the past week.”

The RTBU is deeply saddened by the tragic accident that has taken the life of two rail workers and unnecessarily injured many more.

The Sydney to Melbourne XPT train derailment near Wallan Station last night occurred over a section of track over which was awaiting maintenance. Conditions were altered and V/Line drivers rightly refused to traverse this section over the past week.

Our thoughts are with all those affected by this tragedy, from other rail workers, affected passengers and the family and friends of all those grieving from this incident.

Today marks a difficult day for drivers and rail workers across the state and the RTBU will be here not only to offer support but to ensure a thorough investigation is undertaken.

Shadow Minister for Regional Public Transport, Steph Ryan, said she has been campaigning for the upgrade of the stretch of track where the derailment occurred, which runs through her electorate, since she was elected five years ago.

“It has a very long history and it is one of the worst performing lines in the state, the V/Line service, in terms of its punctuality and reliability,” she told 3AW’s Tom Elliott.

“The Albury V/Line service, which uses this same track, has been subject to very lengthy delays now for a couple of weeks due to signalling issues on this stretch of track.

“I don’t know whether that was a factor in this derailment, but I did raise those issues in parliament this Tuesday.

“I have been, for years, raising those issues and asking for greater investment from the state government for the line.”