When Isaac Jamison suffered a seizure at his Torquay home in 2016, his mum thought it was a febrile convulsion.

He’d had them before.

But when the seizure continued, Benita Jamison called Triple Zero, as she tried to stay calm.

When paramedics arrived, it was clear that Isaac, who was just one-year-old at the time, was in a bad way.

Isaac was completely unconscious and having difficulty breathing on his own, and would later be diagnosed with viral meningitis.

Click PLAY to hear the full chat on 3AW Mornings 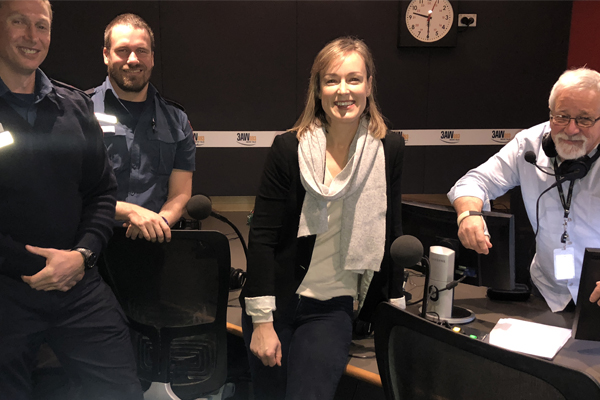 Paramedic Brion Rafferty and his partner were first on the scene.

“It was pretty obvious to us it was something more sinister,” he said.

On the way to hospital, the ambulance crew met the MICA team to transfer Issac into another ambulance.

“His conscious state was low, his blood wasn’t circulating very well we needed to get some IV access,” he said.

“We needed to put a needle into the bone in his leg.

“We didn’t know at that stage it was viral meningitis, he was a very unwell child.”

Today, Benita got the chance, two years on, to say thank you to the paramedics who she credits with saving her son’s life.

Though as you can see in the above photo – the twins weren’t keen on having their photo taken when they visited Neil at 3AW!

“I remember them saying, you’re going to hear a drill now….the guys were amazing, so calm under pressure” – Benita Jamison, Isaac’s mum

She wrote a letter to the crew, grateful for their help on a day she’d rather not re-live.

“I just said thank you, as little as that sounds,” she said.

“It’s so hard to know what to do, when someone saves your child’s life.

“I want them to know, they make a difference to the people they meet.”

An excerpt from the letter is below:

“On 29 October 2016 Isaac had a convulsion that didn’t stop. When the ambulance crew arrived it was very different from the other times. Their experience and actions we will be forever grateful for… We often think about the individuals that were instrumental on the night of the 29 October…your actions and service will never be forgotten.”