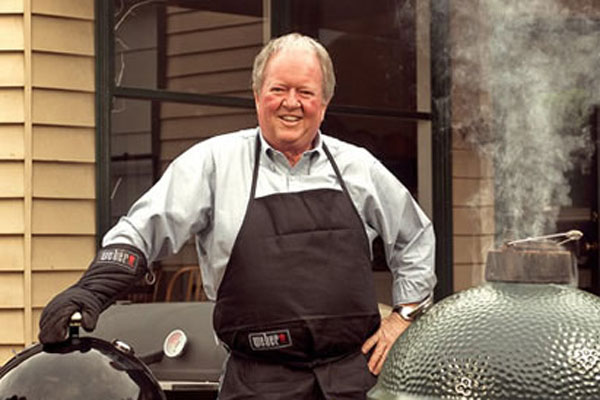 In 2017, in my book BARBECUE UNPLUGGED, my last book which, naturally, I
assume you own, and according to which I further assume that you essentially live
your lives, I advanced a theory about hamburgers.

It was simply that if you chose to convert a great steak – a scotch fillet, for example
– into a burger, you would be suitably rewarded for your extravagance.

That idea resulted in my “super-burger” with its gloriously opulent meat patty on
a lightly toasted brioche bun, the prime meat always processed rather than
minced for the medium-rare patty which is then suitably embellished with a slaw
dressed with dill crème fraiche, sriracha ketchup and perhaps a squirt of sriracha
mayo on each cut and grilled face of the rolls, and finished with a smattering of
Smith’s Original Crisps (and yes, the brand is important).

It worked, and Melbourne is now awash with raucous parties offering nothing
else. For which I apologise, naturally. There is even a catering van – not mine,
incidentally – offering these beauties, which it calls “posh-burgers”. Fair enough.

So now, fish. It so happened that I was left, very recently, with a single steak of one
of my favourite fish: hiramasa kingfish.

And dangerously, I had an idea…

I started by buying a black, squid-ink brioche roll I had spotted in Gontran
Cherrier, the exotic French bakers who have shops around the traps, including
one in Smith Street, Fitzroy, and another near me in Glenferrie Road, Hawthorn.

I then zapped the kingie steak in a food processor, along with half a salad onion
(which I chopped coarsely first in the processor), a splash of fish sauce, a small
knob of ginger which I put through a garlic press, a modest amount of sea salt
(because of the fish sauce), black pepper and about half a cup of Panko (Japanese)
breadcrumbs.

I shaped the coarsely chopped fish and the rest of the ingredients into a burger
patty, let it set in the fridge for a couple of hours, and then oiled it with a touch of
EV olive oil and cooked it to medium rare.

I did this by grilling it for just a couple of minutes a side on a hot grill –
somewhere just over the 200C mark – moving it through 90 degrees the second
time I flipped it, and then rested it while I lightly grilled both sides of the black
brioche roll.

And then, I assembled the burger as follows:
First, I spread both cut faces of the (lightly toasted) brioche with wasabi mayo –
made by stirring a squirt or two of Japanese wasabi from a tube into a large dollop
of Best Foods or Kewpie mayo, to taste.

I then topped the dressed base of the brioche with the patty, topped the patty with
a coleslaw dressed with chopped fresh dill in crème fraiche, and then I topped the
coleslaw with a few Smith’s Original crisps. Racy, huh?
Kingfish? King-bloody-burger, as well!