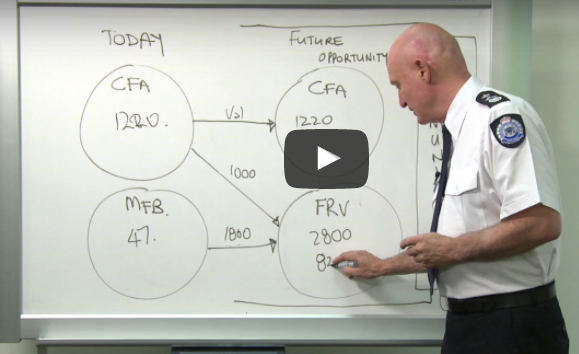 AUTHOR’S UPDATE: Emergency Services Minister James Merlino responded to each of the question posed in this article. His answers are presented in full below each question.

The Andrews Government has found itself in a political pickle when it comes to Victoria’s fire services. Nearly a year ago, the Premier declared he had ended the protracted CFA dispute. But after the Federal Government passed legislation to protect CFA volunteers, it became clear the dispute was far from over. This fire restructure is an attempt to finally make that statement a reality.

But you won’t read that in the press release.

It merely remarks upon a “much needed and overdue reform”.

He makes it sound very simple in a two-minute pitch. In short:

But there are many questions that remain unanswered. And with MPs set to vote on the measures within weeks, Victorians deserve to know the truth about the plan. Here’s what we still don’t know, but should.

You can’t have it both ways. It’s either a name change and Victoria’s fire response remains the same. Or, there is change, and volunteers roles will be affected – in which case we deserve to know about it. No one has spoken about this much, but the package includes the creation of a Fire District Review Panel. This panel will review the current boundaries based on population growth and urban development. This is key. The government says the boundaries are outdated so clearly there will be big change to the number of career stations on the urban fringe. Currently those areas are serviced by volunteers. That is a change that would affect volunteers.

Mr Merlino response: “The fact is that our fire services need to change to handle the growth we have experienced over time. Our outer suburbs are no longer rural areas. They are large suburbs with thousands of family homes alongside industrial zones. This is clear from the fact that the number of responses from CFA integrated stations in metropolitan Melbourne increased by 56 per cent in the decade to 2016.These areas need and expect the best possible firefighting response. That doesn’t mean our volunteers don’t play a significant role in defending our state, because the work they do is extremely important. Retaining the 1,220 CFA brigades and investing over $100 million in additional funding into the CFA will ensure that the role of volunteers is strengthened. At the same time, FRV will ensure that there is a full-time career firefighting team available 24 hours a day in densely populated urban areas across Victoria. This will ensure the fastest possible response and the ability to effectively deal with complicated incidents that may come about in high density urban and industrial areas – examples of these types of incidents in recent years include the Lacrosse building fire, the Springvale Bank fire, and the Essendon DFO plane crash. A single career firefighting service will allow for consistent recruitment, training, career progression and a deeper and wider pool of career staff.”

Emergency Services Minister James Merlino won’t talk about what sort of numbers might be needed in the future. Asked directly at a recent press conference, he referred to the government’s election commitment to hire 450 extra career firefighters. Half of those have already been recruited. The restructure is based on the model in NSW where they pay nearly 7000 firefighters, half of those are part time. In Victoria, we have 2800 career firefighters. We don’t know if the government will allow part time firefighters in Victoria. If the boundaries are going to change, more career staff will be needed.

Mr Merlino response: “We are already recruiting 450 additional firefighters in delivery of our election commitment. Additional firefighters are not required in order to deliver the changes that are being made to the MFB and 35 CFA integrated stations. If additional staff are required in the future that will be as a result of changes recommended by the independent Fire District Review Panel. The Panel will make recommendations for changes to the boundaries between fire services on the basis of population changes, urban development and demand. This reform will ensure fire services respond to changes to our state and that Victorians can rely on a service that is modern and responsive to local needs. It is consistent with and delivers on recommendation 63 of the Victorian Bushfires Royal Commission.”

The CFA surge capacity is the ability for large number of volunteers to mobilise and be deployed anywhere in the state during a major fire event. The surge capacity is seen as crucial to keeping Victoria safe. The government insists surge capacity will not be affected by the restructure. Explaining the plans Daniel Andrews said for too long governments have “turned a blind eye to growth and asked volunteers to do more and more and more.” So under these plans will volunteers be asked to do less? If the boundaries expand, career staff increase and volunteers are asked to do less, why would a volunteer continue?

Mr Merlino response: “This is not about asking volunteers to do less, instead it is about reforming 1950s arrangements so that our fire services, both career and volunteer, can respond to ever increasing demands and keep our community safe. The surge capacity provided by the many CFA volunteer brigades in the outer suburban areas and regional cities, including those adjacent to integrated stations, is one of many vital services CFA volunteers provide. Under our reform these CFA brigades are not affected by the boundary change,  they will continue to work in their own communities and provide surge capacity for major emergencies and to support their colleagues. They will also be better supported through the $100 million support package announced as part of the Government’s reforms. Looking to NSW, which has a similar model, we can see that the number of volunteer firefighters have actually increased over the past decade.”

The Union says it was told “at the same time as everyone else”. The MFB was told the day before the changes were announced. Volunteer Fire Brigades Victoria says it hasn’t been consulted at all. Asked about consultation, the Premier said “the government has the right to get on and govern”.

Mr Merlino response: “We consulted a number of groups, including firefighters and their representatives, in the lead up the release of the Fire Services Statement. We will continue to do so into the future. We have met with many volunteer firefighters, including at their stations, over the last few months, and heard directly from them about what improvements they think need to be made to our fire services. Since December 2016, I have been chairing the CFA Policy and Performance Consultative Committee, which has representatives of both volunteer and career firefighters, working directly on ways CFA can improve and modernise. As was made public, on 8 May 2017 I had a meeting with the VFBV where we discussed the problems facing the fire services, including industrial and cultural issues, and the need for change including considerations around structural reform. Government officials had a further meeting with the VFBV following this discussion. The reforms we have announced deliver on priorities which the VFBV have expressed both in our meetings and publicly: to preserve the state’s surge capacity, protect the status and role of volunteers, provide further support and ensure that career staff continue to work closely with and support volunteers.”

This is anyone’s guess. At this stage the figure is at least $310m, but that is VERY conservative. It includes the extra $100m for the CFA, as well as the cost of presumptive rights for cancer compensation. The government is refusing to say how much its election promise of 450 firefighters has cost. This is despite the fact the promise is “fully funded”. The government says the Fire Services levy won’t change for two years. But two years isn’t really very long. If we expand the boundaries and hire more firefighters there will be a cost and it will be Victorians who will pay.

I’m not saying these changes are bad. I agree residents in Eltham deserve the same fire protection as residents in Essendon. But Victorians also deserve the truth about the plan. If the change is implemented how Craig Lapsley explains, the only problem it will solve is the industrial dispute.

Mr Merlino response: “The transition costs for the establishment of FRV are relatively small. We have set aside about $27m over the next four years for this, largely held in contingency. We are also investing $100m in additional support for CFA, of which $44m is for capital upgrades and $56 is for training, additional brigade support and other assistance that CFA volunteers have told us they want. We are setting aside approximately $50m per year for presumptive rights, which is a very conservative estimate of the likely  cost of this scheme. We are also investing $12m over four years to establish the Emergency Services Infrastructure Authority. Any costs in implementing fire services reforms will not be met through the Fire Services Property Levy. The amount collected won’t exceed the 2016/17 amount for two years.”