“This guy is out of control”: PM slams CFMEU boss for using his kids in social media post

Prime Minister Scott Morrison says he is working with Industrial Relations Minister Kelly O’Dwyer to consider whether the CFMEU could be deregistered.

It comes after CFMEU Boss John Setka yesterday tweeted a photo of his young children holding up a sign which reads, “Go get f*cked”.

“Anybody who saw what happened yesterday, using his children, with profanity to engage,” Mr Morrison told Neil Mitchell.

“This guy is out of control.

“They (the CFMEU) are out of control, they are constantly being hauled before the courts, paying fines, they just keep willfully keep breaching our laws.

“I’m deadly serious about this.

“But you can’t deregister someone for using a photograph of their kids in an ill-advised way?” Neil said.

“This is the straw which breaks the camel’s back.

“There are great unions in this country, this isn’t about them.

“This is about militant thugs in unions who own the Labor Party.”

“I’ve always had some respect for John Setka, he fronts questions and stands up for his beliefs,” Neil said.

“This tarnishes him, it’s tacky and unfair on the kids.

“Not only the obscenity, little kids would have no idea what they were associated with.

“But using them to make a political statement and doing it in an exploitative and obscene way – I think the union leader overwhelmed the father here.” 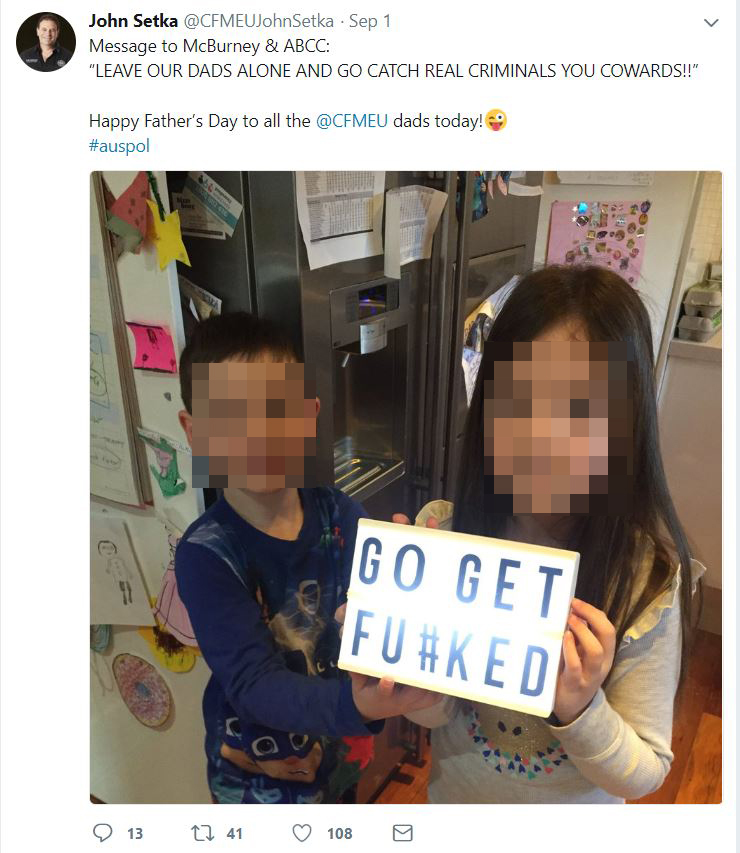