The owner of a Victorian timber mill has denied going too far after he erected a sign telling Daniel Andrews to “die you mongrel, c***”.

John Mavros, owner of Heyfield’s Canningvale mill, told Neil Mitchell he had lost all respect for the Premier.

It comes after government announced a statewide ban on the logging of native trees.

The sign, which has been professionally put together, brands the Premier as “sleazy, slimy, arrogant and ignorant.”

It also labels him as “job terminator of Victoria”.

But it’s the final line which has drawn criticism. 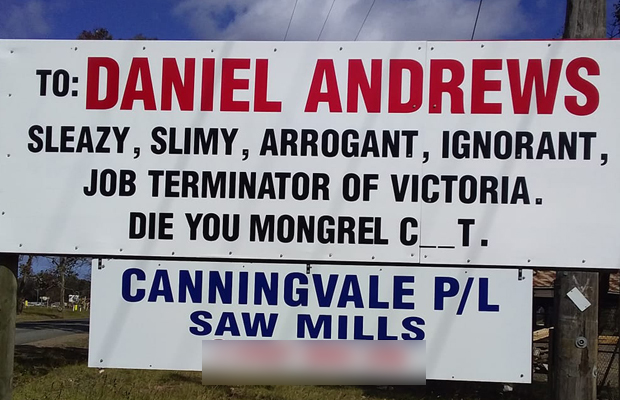 “I think that is crossing a line,” Neil Mitchell said.

But Mr Mavros said his life had been “destroyed twice” by government policy in regards to logging.

“It’s my freedom of my expression,” he said.