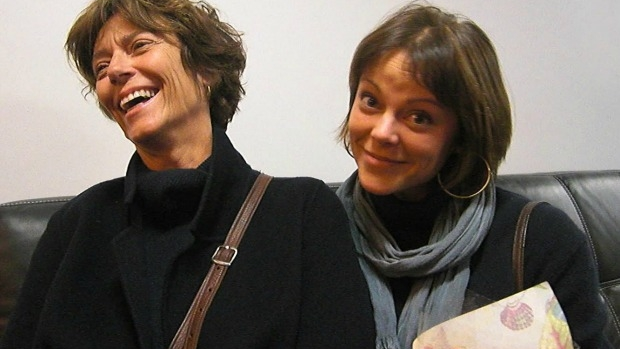 TIME TWINS: Rachel Ward & daughter Matilda Brown subject themselves to an interview where everything happens backwards.

In the time-travel mockumentary The Death and Life of Otto Bloom, real-life mother and daughter duo Rachel Ward and Matilda Brown play the same woman across different time periods, a psychiatrist trying to solve the riddle of a mysterious young man (Xavier Samuel) who is travelling through time backwards.

Wife and daughter respectively of Aussie acting icon Bryan Brown, both are major talents in their own right.

After a successful career as an international model in the 1970s, Rachel Ward turned to acting, appearing in films such as Sharky’s Machine with Burt Reynolds and Against All Odds.

She met Bryan Brown while making the mini-series The Thorn Birds and they married in 1983. She has also branched out into directing, making several acclaimed short films and the award-winning feature Beautiful Kate in 2009.

Matilda Brown is a rising actress and aspiring director, having made the short film series Lessons From the Grave, starring her alongside her father, and Let’s Talk About, which is available on Foxtel Play (not Presto, which has since folded since the interview took place).

She also made a terrific short film called Am I OK (referenced in the interview), about a woman on the edge. (You can check out her short films at https://vimeo.com/user6074634)

As well as discussing the film, Matilda speaks wittily about what it was like as a kid living with parents who everybody seemed to know. In a revealing segment, both women reflect on how wisely they regard time, with Rachel’s frank life assessment eliciting an illuminating reaction from her daughter.

This is a normal interview in every regard, except one. In keeping with the film’s time-travel theme – and to have a bit of fun – we agreed to conduct the interview backwards.

That is, we begin by saying goodbye and end by saying hello, with all the questions being asked in reverse order.

Some events also happen backwards, such as when Rachel ‘leaves’ the interview half-way through.

Special thanks to Rachel and Matilda for playing along.

To watch our interview with Rachel Ward and Matilda Brown, please click here:

To view a trailer for Otto Bloom, please click here:

For an interview with director Cris Jones and Xavier Samuel, please click here: