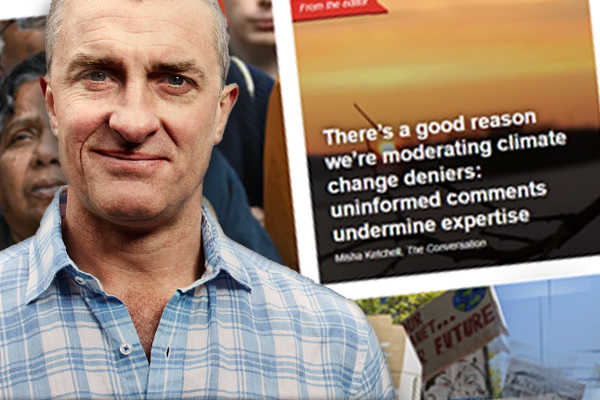 The website announced yesterday it will delete comments which dispute that climate change is man-made, and the accounts of those who post the comments will be locked.

Tasmanian Liberal senator Eric Abetz has today compared The Conversation to Hitler, Stalin and Mao for the decision to ban the comments.

“History is full of examples where people all thought one thing about a scientific example, and then someone had the guts to stand up and say ‘actually, you’re all wrong,” the 3AW Drive host said.

“There’s Galileo who was put in jail by the Catholic church for saying that the earth revolves around the sun, because the established wisdom of the day was that the sun revolved around the earth. He died in jail!”

Editor of The Conversation, Misha Ketchell, said the decision was made because the comments undermine the science.

“What we’re going to do is say that where people are just putting forward opinions that misrepresent the science, or the fact, we’re not going to continue to have those positions on our website,” he told 3AW’s Tom Elliott.

“What I’m trying to do is ensure that the evidence that we present to our readers is well-informed and doesn’t distort or misrepresent.”

Mr Ketchell said 97 per cent of climate scientists agree that human activities are causing global warming, and there is evidence that comments denying man-made climate change undermine this finding.

“There’s a lot of evidence that shows if you run an article by a peer reviewed scientist, and you run a comment at the end that says ‘this is all nonsense, this guy is an idiot’ it actually has a huge impact on the way people will read the article,’ he said.

“It really undermines their trust in that article, and their ability to accept the evidence.

“Sometimes science does get turned on its head.

Once upon a time, we viewed #ClimateChange sceptics as merely frustrating. Not anymore.

As a publisher, we won’t perpetuate ideas that will destroy the planet.@mishaketch explains @ConversationEDU‘s zero-tolerance for climate deniers: https://t.co/VbRmFWWycC