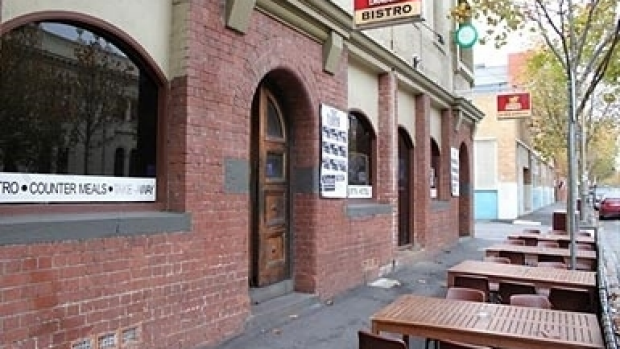 Second review, the first was in the early 2000s. Indeed, the JCH could be a first time every six months or so, as the pub adopts an artist in residence approach to its kitchen – much loved eateries around town rotate through the pub offering different fare. Previously, Bluebonnett from Collingwood did its fabulous smoked meat/bbq thing. This time it is Leonards House of Love (LHOL) from Sth Yarra with its American Short order diner approach; burgers/chicken/tacos.

The JCH has been doing this for ages: how brilliant.

Located across the road from Trades Hall in Lygon Street, the old brick pub is essentially split in 2 by the bar – dining and drinking on one side; music, socialising the other.  The JCH retains the old pub carpet, a mish mash of chairs and tables, it promotes live music as much as any other pub in Melbourne and given the crowd on a cold, wet thursday night, is monstrously popular.

Want one of the best reminders of the live scene of 30 years ago? This is your destination.

*** Message to the pub – Please link the food menu to the website – yes it?s on Facebook – but also on web as it?s a good story to tell.

Burgers, tacos, chicken, vegetarian, dogs. Turbo charged chips.  Sauces/Spices. Watch the kitchen, with its groovy 60s livery either side of the pass, go about its work. Absolutely non stop. The food arrives in takeaway containers to complete the visuals and then go for your life.

Cheeseburger. $12. Good. Mix of brisket and short rib, the patty held its consistency and with a jalapeno and a fabulous kitchen made sauce; worked out to be a a burger treat.

Cauliflower Nachos. $15. Ok. Two reasons these did not match the heights of the preceding two dishes. One, a vegan gyros (sounded great with eggplant tenders the hero was strangely unavailable that night and is the only stand-alone vegan main). Second the spiced cauliflower, nachos, salsa, guacamole, tomato sauce – cheese removed for vegan – had some nice tastes but needed to be warmer on arrival.

While there is a small wine list priced in that $40 a bottle/$8 a glass range, it?s about beer with a stack on tap – lot of love for Coopers here. S&W Pacific Ale, fast becoming a favourite was $6 a pot. No problems with taste/glassware.

Loud, a little chaotic, but charming. With the DJ going at 11, you will repeat an order, but when vital signs of life are everywhere, just go with flow. Table service for the diners (order at bar and grab a number). It?s all good.

The JCH brought back a flood of pub rock memories from the late 70?s and early 80s.  Ah, the sticky carpet, the noise, the packed Thursday night all awaiting Radio Birdman or the Radiators to do their thing after Donnie Sutherland had talked about them. This pub has struck a chord with young punters either wanting a communal drink or somewhere to try different as far as pub grub goes. You can have fun at a pub sans horses or pokies.