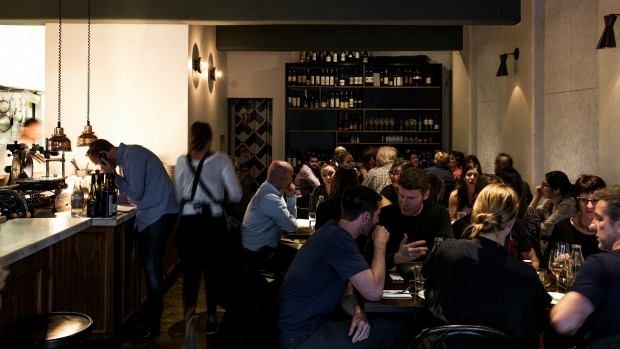 Pasta’s kind of my thing.

Tipo 00 came across my radar towards the end of 2014, and it immediately went of my ‘list’ of places I must try.

It was popping up everywhere, and it was receiving glowing reviews.

Winning Best New Restaurant of The Year for the Good Food Guide 2016 was what finally prompted me to get there, in a hurry.

We arrived around 6:15pm on a Tuesday night to a bustling restaurant; Tipo is pretty small and at a guestamite probably only seats around 40 diners.

Yes you can book, but unfortunately I left it too late so decided to wing it for a bar seat.

Even though we arrived early we still had to wait around 45 mins for a space to come up.

Pasta is the serious star, but the starting menu holds its own.

We initially decided on two starters but then only had the room for one as I somehow got talked into ordering a 3-course degustation of pasta (explanation further down).

I love globe artichokes, and spring is the season for them so that was the decision we came too.

Cooked well they are such a delicious vegetable complimented by an almond puree, and to my delight a sourdough like crumb for contrast of texture.

The best bit of the dish was the amazing braising juices, which brought the most beautiful depth of flavour to the whole dish.

The waiter (as they do) asked me how I was going with the menu to which I responded ‘not so good?’ he looked at me very confused until I followed up with ‘I want everything and I can’t decide’ to which his response delighted me.

We were given the option of ordering 2 or 3 individual pasta mains, which they would then split onto two plates so we essentially could have three-pasta courses? had all of my carb-loaded food dreams come at once?

First to arrive was the saffron tagliolini, spanner crab, zucchini and chilli ($28).

Tagliolini is a long flat pasta, similar to tagliatelle but smaller in thickness.

The tagliolini has saffron through the actual pasta dough made for a beautiful yellow pasta, the flavour of saffron was subtle.

The dish as a whole was fresh and tasty, with nice generous pieces of spanner crab and fine slithers of zucchini, the chili again was subtle but all tied in with a light seafood broth.

Potato and cauliflower tortellini ($24) (a bigger version of tortellini) was the second of our pasta dishes.

We were served three each, so in a main I’m guessing there would be six.

Also a delicious dish, the potato and cauliflower puree in the centre was soft, and the tortellini were well cooked and perfectly shaped.

Burnt, butter, shaved cauliflower and sage was the finishing touches.

My favourite of the three was the braised rabbit, majoram and hazelnut parpadelle ($27).

The rabbit was wonderfully cooked and  nothing like the wild game rabbit I am used to cooking at home for my fennech stuffat.

It was soft, and juicy and the hazelnuts were a perfect addition.  Seeing braised I automatically think heavy and rich but this was anything but, it was a lightly flavoured dish with an almost clearish braising sauce which was an apparent theme throughout all of their pasta dishes.

I had to make room for the dessert a ‘tiramisu’ ($14).  Nothing like the traditional tiramisu you will find in Nonna’s kitchen but a rather refined dessert, with flavours of coffee, marscapone and cream.

The pouring of a chocolate salted caramel sauce over the top added flavour and theatrics.

The drinks list had good wine options (Italian and Australian wines) along with a few of the classic Italian apertifs.

I did find the drinks list ito be slightly expensive with most by the glass options starting at around $16.

Along with the pasta, there is also risotto, and 2 ? 3 main dishes which consisted of classic Italian fare.

An easy option is the set menu for $55, which gives you a taste of two starters, two pasta mains and a dessert; it looked like a lot of people were going for this.

Open for dinner or lunch this busy little restaurant has European character, with a buzzing Melbourne vibe.

Focusing on one simple thing like pasta might seem like an easy task, but it’s often the simple things that are the hardest, because if you don’t get it right there is really nothing to hide behind? Luckily these guys hit the nail on the head.