Click PLAY below to hear Tregan’s review on 3AW Breakfast

I present to you Phat Chicks, where fried chicken and beer take the stage in West Footscray’s “Little India” end of Barkly Street.

When Phat Chicks opened swung open it’s doors a couple of months ago there were lines reaching around the corner, seemingly the westies wanted to get their hands on some hot fried chicken and buffalo wings! We went on a Tuesday around 7pm and even though the small space was full there was room for two.

I believe there’s a bit of a criteria when it comes to fried chicken.  The coating needs to be crunchy, golden and cooked right, not over, or under.  You don’t want it to be too thick or bready because it takes over the chicken, it needs to be balanced batter to chicken ratio.  The batter should have flavour, but not so much as to be again overpowering the meat.  The chicken must be moist and juicy, definitely not dry.  There was delivery on all accounts, great batter, cooked to perfection, and juicy chicken.

The fried chicken comes in five ways; breast, dark meat aka “thunder thighs”, drumsticks, ribs and “pimped up” wings.  The chicken is sold by the piece starting a $1 for a wing (min of five wings to be purchased).  Breast is the most expensive at $6.50 a piece but everything else is priced well below this.  Take your choosing of a saucy topping; sweet chilli garlic, sesame soy, cheese or spicy.  So here how it goes.  Choose your chicken, I got thigh… tick.  Choose your sauce, I chose sesame soy…tick.  Then with your hands, you grab your deep fried, crunchy, golden piece of chicken, smothered in sticky sesame soy, and take a big bite.  What dreams are made of. 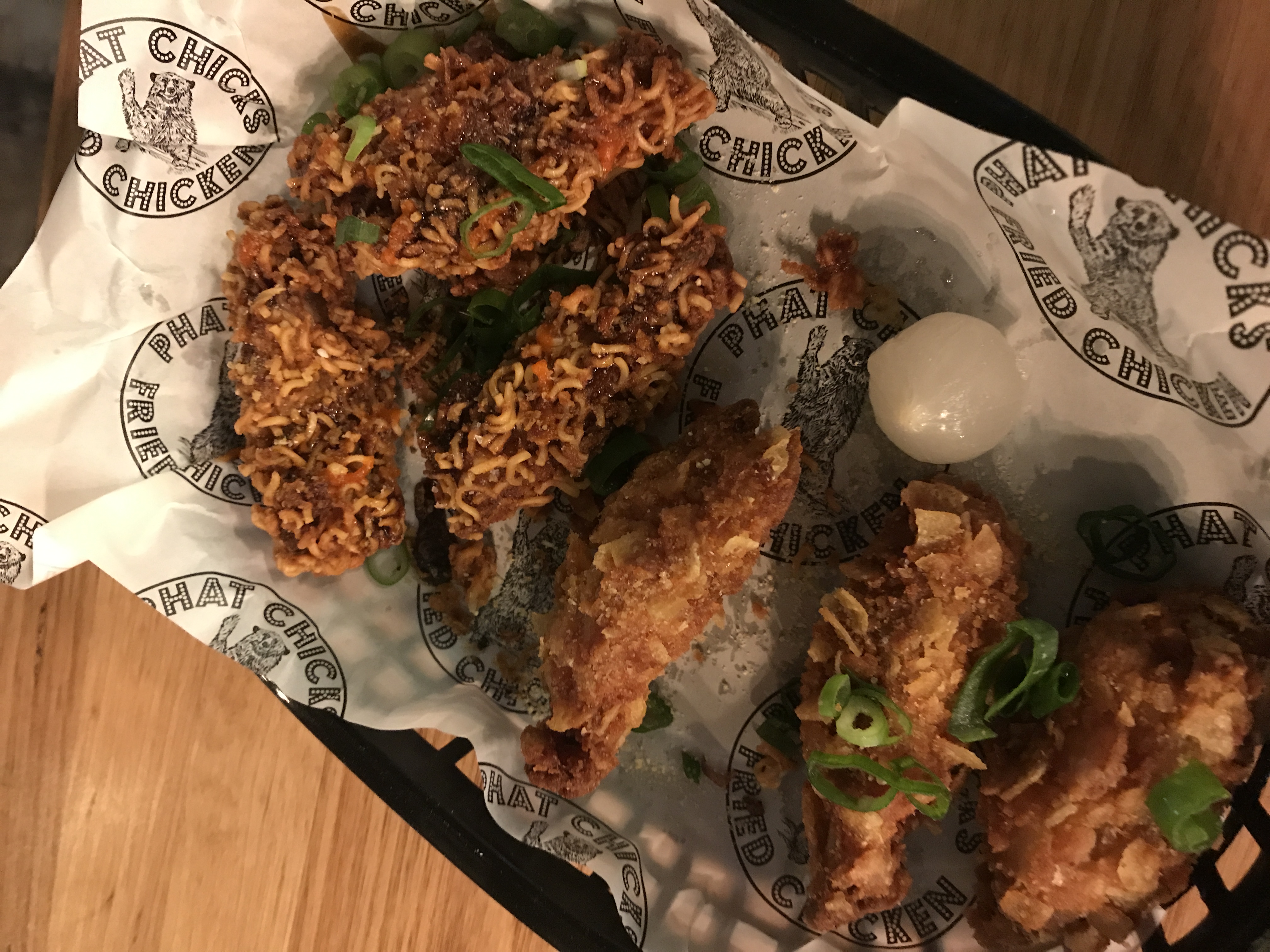 The pimped up wings are a must have, it’s a hard choice between the “Mi Goreng” or the “Salt & Vinegar Chips” Where’s the pimp factor? These guys use dried mi goreng noodles, with a special seasoning to double coat the ribs, creating another layer of fried crunch.  Topped with kecap manis soy and sriacha you have a wing that’s punchy with flavour and exciting with texture.  Alternatively, you can try the Salt & Vinegar Rib, which creating a similar effect of double crunch, these guys get a standard bag of kettle chips, and add these on top of that regular coating.  Again, flavour and texture plus! 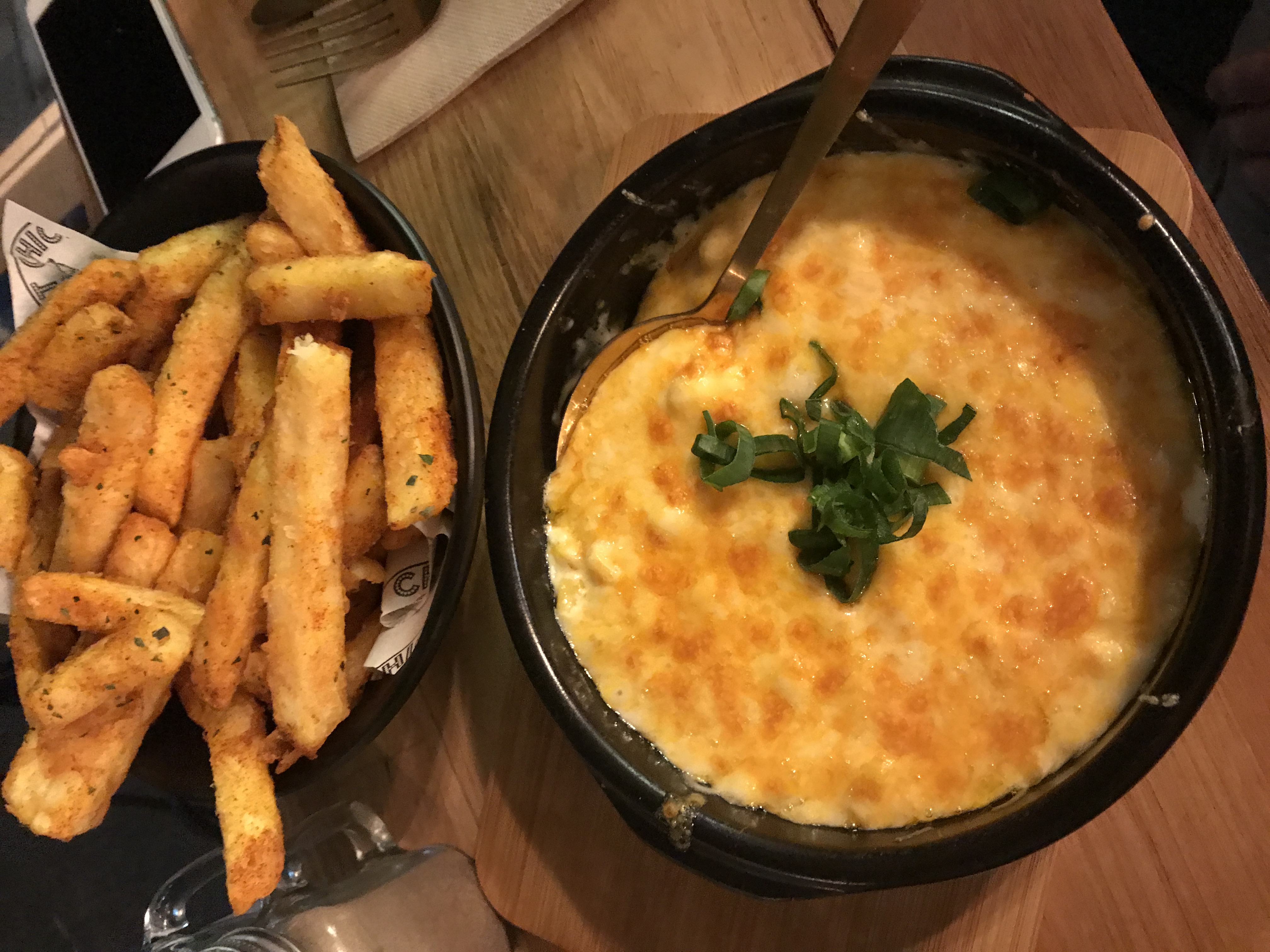 With fried chicken comes sides.  Mostly standard, Cajun Fries, Onions Rings, Mac N Cheese.  I ordered the obvious chips and onion rings, because, why the hell not make it a full fried affair.  But it wasn’t the Mac n Cheese that took my liking, it was the Corn and Cheese.  Replace the mac, with corn kernels, and you have a baked dish of corn, béchamel and grilled cheese.  It was a nice light alternative to the relatively hit and miss Mac n Cheese.  All sides are under $10.

The beer list is massive, with over 25 craft beers on tap and in bottle and cans.  Tap beers rotate but there is a nice focus on locally (and I mean down the road in Footscray local) brewed beers.  A couple of my personal favourites make the list, Hopnations Red American IPA “The Chop” & Two Birds Taco Beer.  Beers are almost the most expensive thing on the menu averaging at $9-$10 a go.

It’s very relaxed vibe, order your food at the bar, could almost get away with wearing your trackies kind of place.  On the small-ish side it probably sits around 25. Tables, bench seats and a “lounging” area for a sit back, and sink in feel.