Usman Khawaja has ton of fun as Stars left Thunderstruck 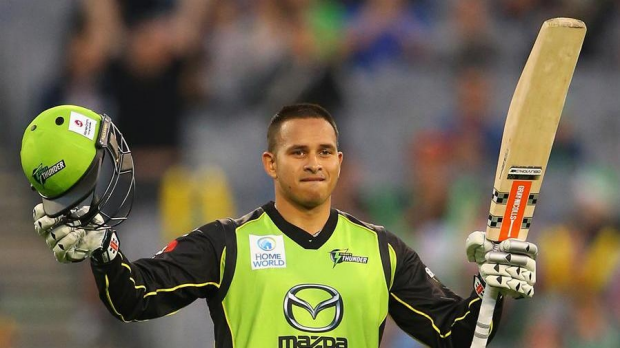 Khawaja has not played for a month since injuring his hamstring in the second Test of Australia’s trans-Tasman Trophy series against New Zealand in Perth.
He sat out the Thunder’s victory over cross-town rivals the Sydney Sixers in the opening match of the BBL05 last Thursday night as a precaution.
But Khawaja can start planning to spend Christmas in Melbourne and prepare for his first Boxing Day Test at the MCG against the West Indies after spectacularly getting through his comeback game.
That will mean a nervous few days for Joe Burns or Shaun Marsh to see who will make way for Khawaja to return to Australia’s Test line-up.
Opening the batting, Khawaja’s unbeaten 109 off 70 balls was the highlight of the Thunder’s innings of 6-179 and their one-run victory which condemned the Stars to their second straight defeat.
Khawaja’s knock eclipsed the 102 not out made by David Warner – coincidently also against the Stars at the MCG back in 2011 – as the highest score by a Thunder player in the BBL.
He dominated the opening stand of 38 with Jacques Kallis (9) and was well supported by captain Mike Hussey (16), West Indian Andre Russell (22) and Clint McKay (9 not out from 3 balls) in helping Thunder set the Stars a formidable target.
He hit 12 boundaries and three sixes, bringing up his century in the 19th over.
It was his third consecutive century following the hundreds he made during the Test series against the Black Caps in Brisbane (174) and Perth (121)
Khawaja and Russell added 53 for the fifth wicket in just under five overs.
The Stars got away to a flyer in their run chase through Marcus Stoinis (27) and Luke Wright (18) who took 48 off the first four overs.
But Russell (2-28 off four overs) highlighted his all-round value to the Thunder line-up by dismissing that pair in consecutive balls in the fifth over.
After Glenn Maxwell (2) and captain David Hussey (0) failed, an 84-run stand for the fifth wicket between Kevin Pietersen (76) and James Faulkner (45 not out) turned the momentum of the match and lifted the Stars within touching distance of victory.
Pietersen, who brought up 1000 runs in Twenty20’s for 2015 during his innings, smashed six sixes – including three off the 17th over – in this 42-ball innings.
But he holed out to Fawed Ahmed on the boundary in the 19th over.
Faulkner needed a boundary off the last ball to win the game but couldn’t find the rope.
Remarkably, it’s the first time the Thunder has strung together consecutive wins since their first two matches played in the BBL way back in the inaugural season 2011-12.
Macquarie Radio Summer of Cricket