Fire fears have reignited as many parts of the country swelter through a scorching day.

In Melbourne it will feel more like Darwin today, with the city heading for a humid top of 43 degrees.

The heat is expected to peak around 3pm, before some potential thunderstorms.

“Moisture is moving over Northern Territory, down through South Australia and across to us. We don’t usually see moisture levels quite this high across Victoria. It will become increasingly humid throughout the day and will feel more like a day across Queensland or Darwin than a usual day in Melbourne!,” he said.

“Today we will have some stronger winds and we know we are in for a significant challenge.”

A day of total fire ban has been declared for much of the state.

“It is really dry in the west of the state and we have got the potential of dry lighting coming through the state,” he said.

“We just want to alert people that it’s never too late to download the Vic Emergency App, know who the emergency broadcasters are and stay across local conditions.” 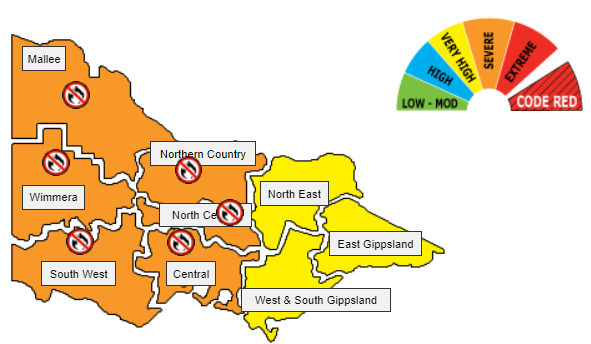 “We are going to see some thunderstorm activity as we move into this afternoon,” he told 3AW’s Ross and John.

“There’s always that risk of fairly variable and gusty winds as we see thunderstorms moving through.”