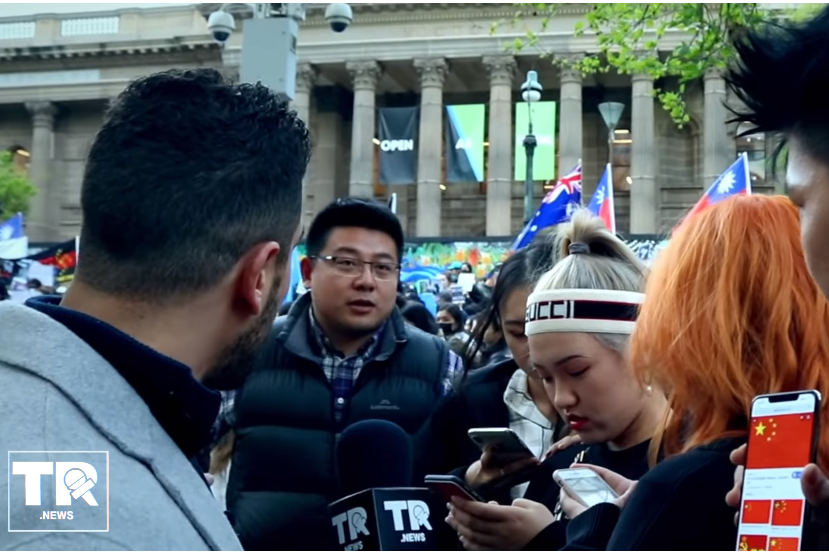 On Sunday, pro-China protesters at a rally outside the State Library of Victoria were speaking to citizen journalist, Avi Yemini, when they were interrupted by a well-dressed Chinese man.

The man said something to the protesters, who immediately stopped speaking and left.

After the video was uploaded to YouTube, there was a huge reaction from people who said the man who interrupted was likely to be a Chinese state spy.

Chinese interference expert, Dr Clive Hamilton, said it’s quite likely that the man in the video was a Beijing government operative.

“You can see that the Chinese students, who were happy to talk to the journalist, suddenly shut up and became quite fearful and disappeared. Clearly this guy had a lot of authority over them,” he told 3AW’s Neil Mitchell.

Dr Hamilton said there have been other similar occurrences in Australia.

“It was consistent with other incidents that have occurred on the streets of Melbourne and elsewhere, such as the University of Queensland campus, where people who, according to experts, appear to be operatives for Beijing’s ministry of state security, are really coordinating events,” he said.

The mural, on Hosier Lane in the CBD, became a shrine of sorts, with Chinese-Australians leaving flowers and gifts at the site, and stopping to pay their respects.

“After a day or two these stooges turned up, pretty clearly from the Melbourne consulate, and they stood there in their suits, and they basically watched people, took photos and intimidated people out of commemorating,” Dr Hamilton said.

Dr Hamilton said it is usually Chinese people who are intimidated by Beijing operatives, but he has heard of others also being targeted.

“I know of dissidents, mainly Chinese, but actually one or two critics of China who are anglo-Australians who are followed and surveilled by people who are agents of the Ministry of State Security on the streets of Sydney, Melbourne, Canberra,” he said.

“It’s illegal under foreign interference laws. At a minimum they’re engaged in stalking, and it is a big question as to why Victoria Police, and particularly the Australian Federal Police, are not on to this and basically arresting them.

“Why do we tolerate this?”

Press PLAY below for the full interview.