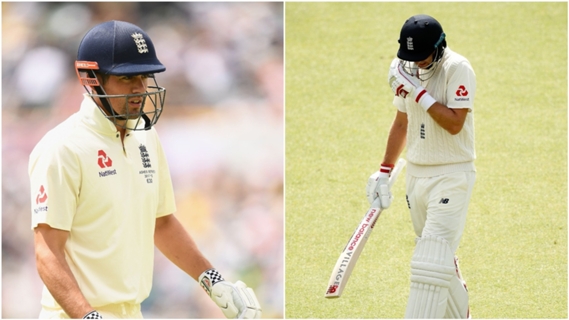 Alastair Cook and Joe Root have struggled during England’s Ashes tour of Australia but James Vince expects the duo to prove their class.

James Vince believes it is only a matter of time before Joe Root and Alastair Cook live up to their star billing as England slip towards Ashes defeat.

Australia enjoyed another fruitful day in Perth on Sunday, extending their first-innings lead to 259 before reducing the tourists to 132-4, Cook and Root each falling for 14.

With the inexperienced Vince, Mark Stoneman and Dawid Malan making up three of England’s top five, much had been made ahead of the series of the responsibility on the current and former captains to do the bulk of the run-scoring.

However, Cook’s six innings have yielded just 83 runs at 13.83 and although Root has passed fifty twice, his 176 at 29.33 pales into comparison with opposite number Steve Smith, whose 426 at 142 include a double hundred and a century.

“From my point of view, you look at those two guys and if they don’t score runs you expect them to score runs in the next innings,” said Vince, who made a fluent 55 on day four before being cleaned up by a magic ball from Mitchell Starc.

“They’ve shown over the their careers that they don’t often have long periods without scoring runs and for the other guys in the team like myself, you look at them and expect them to score runs.

“That’s not going to happen for them all the time but they are both very mentally strong and capable. Fingers crossed next time they make a big contribution.”

Rain is forecast for the final day, when England’s first-innings centurions Dawid Malan and Jonny Bairstow will look to protect a fragile tail for as long as possible while Australia go in search of the 3-0 scoreline that will secure the return of the urn.

“We try to put the rain to the back of our minds,” said Vince. “A couple of days ago, today was supposed to be more of a washout than it wasn’t. I haven’t seen a huge amount of rain during the time I’ve been in Perth.

“The two guys at the crease spent a lot of time there in the first innings in slightly different conditions, but we’ve got to have belief that we can stay in the series and get over the line tomorrow.

“It’s going to be tough. I’m sure there will be some good balls flying about out there but these two showed in the first innings that they can occupy the crease for a long time. Hopefully we can get off to a good start in the morning.”