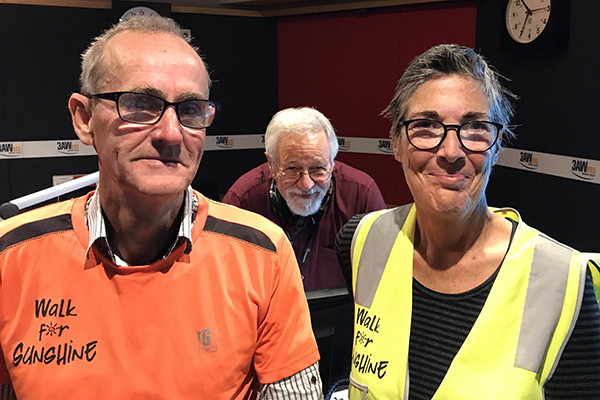 It’s taken Liane and Tony Drummond a year and two days exactly, since they began their 10,000 kilometre walk around Australia to raise awareness about mental health.

They called it the ‘Walk for Sunshine’, to honour Liane’s son David who suicided on October 9, 2016.

But what they’ve discovered, the personal stories of grief, the failings and the flaws in the mental health system, was at times a harrowing experience.

And it’s also given them a focus in the dark days.

They’ve finished up their walk today, on World Mental Health Day, and joined Neil Mitchell to talk about what they’ve learned in the last 12 months.

Grief is a very isolating experience. I miss him, the words don’t quite adequately describe. I love him. My hope is, his death is not in vain – Liane

Liane, a registered nurse, who has also worked in community health explained when her son had first came into contact with the mental health system.

“After my son suicided, I had the opportunity to reflect on the time that he actually accessed service for his mental health issues, it became apparent to me, I felt there were gaps,” she said.

To find out more about Walk for Sunshine, visit the Facebook page

At age 25, he was hospitalised after attempting suicide.

He was discharged with crisis support at the time, monitored with twice daily visits, and around the clock care with Liane and David’s father.

“At the end of the two weeks, with medications just having begun, he attempted again. At that time, he was made involuntary, but there were no beds,” she said.

“At that point, the hospital that was treating him, decided he needed ongoing care so they transferred him to another mental health care facility within a public hospital system in this state.

“They discharged him less than 24 hours later, despite the psychiatrists intervening on his behalf.”

She said one of the solutions is more hospital beds for those who are suffering severe mental health issues.

“It’s outrageous. I say that because, I don’t want anyone to feel sorry for me, but when my son died I had a heart attack. Just a couple hours later, just with the stress. Fully recovered,” she said.

“What it highlighted to me was, the response of care in the medical system to my physical needs, it was immediate. It was just amazing.

“Yet when my son presented, with an equally life threatening condition for intra-psychic pain, our system isn’t managed and geared to that.

“We do physical pain really well, but we don’t do the psychic pain very well.”