A Victorian man is furious after being told his custom licence plates, which he has had for a decade, will be cancelled.

Peter Hansen received a letter from VicRoads telling him the custom number plates on his 1971 Holden LC Torana, which read ‘WEPN’, are “offensive” and “inappropriate for public display”.

He told 3AW’s Neil Mitchell VicRoads became aware of the licence plate issue when he tried to have another car registered with the custom plate ‘WEPN2’.

“Most cars that are show cars are like wrestlers, or there’s a persona about the name. That’s all this is, it’s a name for my car,” he said.

“I’ve got the name out there.

“It’s not Peter Hansen that gets invited to the Summer Nats, it’s WEPN.”

Mr Hansen said he posted the letter he has received from VicRoads on social media, and the response has been overwhelmingly in his favour.

“People are more offended that people are doing this than of the word itself,” he said.

The Department of Transport says tens of thousands of number plate combinations are checked every year.

“We review number plate combinations from time to time and we occasionally recall number plates that may be deemed inappropriate or offensive,” the department said in a statement.

“We also reserve the right to recall number plates that may later be deemed offensive, disrespectful to the law or are inappropriate for display, such as plates that reference violence.”

Mr Hansen has appealed to VCAT and the ombudsman to overturn the VicRoads decision and is waiting a reply. 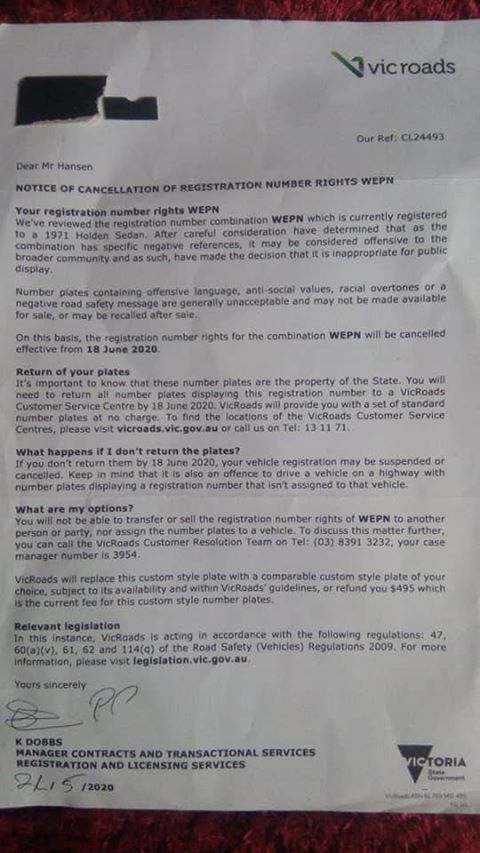