Get all the latest up to date information from emergency services here.

Four people — who are not firefighters —  are unaccounted for and authorities say there have been “significant property losses” as raging fires burnt thousands of hectares across East Gippsland and the state’s north-east.

The fire front has now passed the popular tourist town of Mallacoota, where 4000 people had taken refuge on the beach and in the water nearby.

Authorities say the true number of homes which have been destroyed by fire is likely much higher.

Mallacoota resident Maisy says she doesn’t know how the community will recover from the fires.

Thousands are still sheltering at the beach in the popular tourist town.

Maisy Roberts, who works at the Croajingolong Cafe in Mallacoota, said the community is devastated.

“I just don’t know how we’re going to pull through this, really,” she told 3AW’s Nick McCallum.

Ms Roberts said she believes her house has been destroyed.

“I can see the fire right there,” she said. 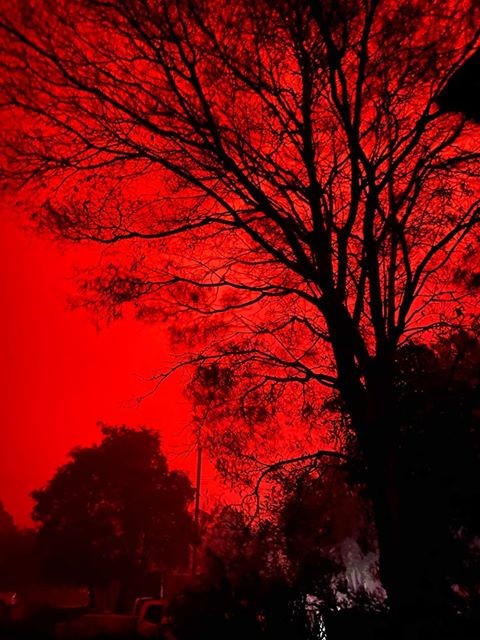 More than 150 towns across East Gippsland and Victoria’s north-east are currently under threat.

Emergency Management Commissioner Andrew Crisp says homes in Mallacoota, Sarsfield, Bruthen, Gelantipy, Genoa and Buchan have been destroyed, but the total number lost has not yet been confirmed.

Eight Emergency Warnings are still in place across the state’s east.

“We’ve got about 4000 people that are down near the water and they’re being well protected by the CFA … but we’re naturally concerned and watching that one with great interest,” Emergency Management Commissioner Andrew Crisp told Red Symons, filling in for Neil Mitchell.

Press PLAY below for more from the State Control Centre.

Press PLAY below for more from the Emergency Management Commissioner.

Taylor Bourke has sought shelter in a boat off the coast at Mallacoota, along with hundreds of others.

She has since heard news her house has been destroyed by the blaze.

“It’s all going up,” she told Red Symons.

“We can hear the fire roaring.

“We can’t see anything, it’s just totally black and orange.”

Another Mallacoota resident, Jann Gilbert, said she’s lost her home and her boat.

“Basically, in the whole block where my house is all of those houses have been lost,” she told 3AW’s Darren James.

“Quite a lot of Mallacoota has burnt.”

She said she believes “far more” than a dozen homes have been destroyed.

“This is devastating,” she said.

Press PLAY below for more from Mallacoota resident Jann Gilbert.

The fires will likely continue to threaten communities for weeks.

“They’re going to keep burning and they will continue to threaten other communities in East Gippsland over the coming weeks if the weather conditions we’re seeing at the moment continue to present themselves every few days.”

Many communities remain isolated due to road closures including a 180 kilometre stretch of the Princes Highway, between Bairnsdale and the NSW border.

The Australian Defence Force is sending three helicopters, one aircraft and two ships to assist in fighting the fires.

I’ve spoken with @ScottMorrisonMP & authorised #ADF to deploy extra assets to the Victorian fires: 3 helicopters & 1 aircraft will fly to East Sale; HMAS Choules & MV Sycamore will sail to East Gippsland. A Joint Task Force has been stood up with Army personnel & Liason Officers

American and Canadian firefighters and equipment are expected to arrive in the next seven to 10 days, after Victorians assisted with the California wildfires earlier this year.

Get all the latest up to date information from emergency services here.