Melbourne has been lashed by wild and damaging winds this morning, whipping up dust storms, bringing down trees and causing traffic bedlam in the west.

A severe weather warning was issued across parts of the state.

A teenager is believed to have been left with serious head injuries after a tree fell on him in Hastings as emergency crews work to clean up fallen trees and power lines.

A huge tree branch also fell on a train near Jolimont Station, causing major delays on the Hurstbridge line.

3AW’s Jane Holmes was on the train and told Neil Mitchell they had been waiting in the carriage for about 45 minutes before they were able to leave the train.

Buses are replacing trains between Clifton Hill and Parliament. 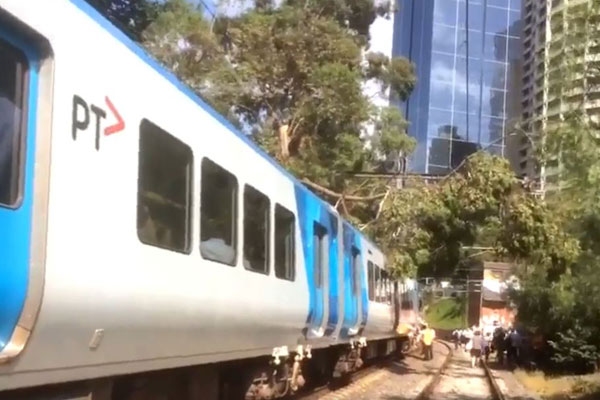 Emergency crews are responding to a number of reports of fallen trees.

New art installation at @FedSquare is being torn to shreds by the wind this morning. Ping @3AW693 @theheraldsun @theage @ClayLucas #Melbourne pic.twitter.com/eQsHbjpPyC

Latest victim of Melbourne winds: The contents of this Laverton shipping container.