Wild winds: Plane forced to make an early landing at Avalon Airport, trees down across the state

The SES has had a busy night and a plane has been forced to make an early landing as wild winds lash the state.

Trees have come down on the roofs of homes and blocked roads across the state after unseasonably warm, windy conditions.

High winds this morning forced a Qantas flight from Los Angeles to divert and make an early landing.

QF94 touched down at Avalon Airport this morning after the aircraft suffered windshear on approach to Melbourne Airport.

“The strong northerly wind charges down the runway at Melbourne airport from the north and as it goes over into the runway it falls down about 300 feet into this huge area of the Market Gardens, south of the airport, and it becomes very turbulent,” he said.

“The wind at 3000 feet when Paul Carruthers flew in this morning was … a south-easterly at about 60 knots, and it was changing in direction to a northerly at the airport of about 40 to 45 knots.”

Mr Nixon said the flight probably landed at Avalon Aiport because of a lack of fuel.

“Windshear does sit for a while, so that could happen again the next time around,” he told 3AW’s Ross and John.

“When you’re coming from LA all the way to Melbourne you don’t have enough fuel to sit around and wait for a long time.”

Mr Nixon said the plane will likely refuel at Avalon before continuing on to Melborne Airport, as processing 500 passengers at Avalon will be extremely slow.

Victorians sweltered through the warmest September night in 20 years last night, with a low of 20.8 degrees, with gusts over 40 kilometres per hour across most of Melbourne.

The SES has received 110 calls for help over the last 24 hours, mostly from Ballarat, the Dandenong Ranges and the Yarra Valley.

A weather warning is in place for damaging northerly winds across parts of the state today. 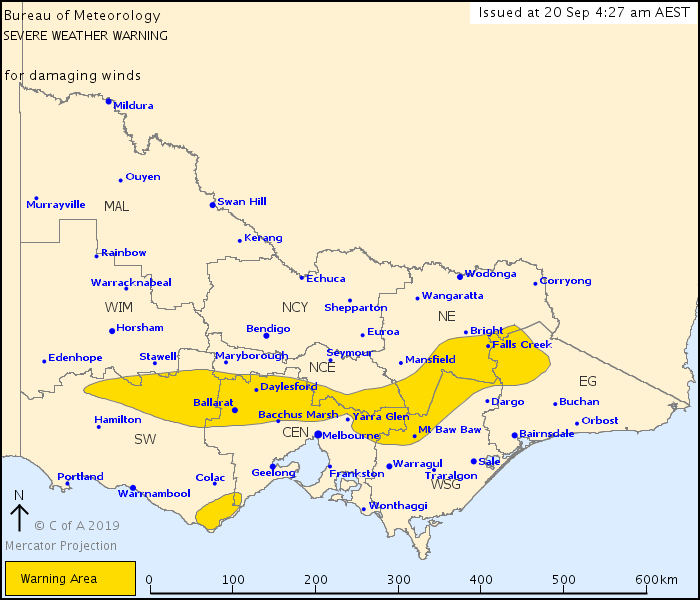