‘Nonsense’: Police deny reports of a ‘no arrest’ policy after wild Collingwood brawl 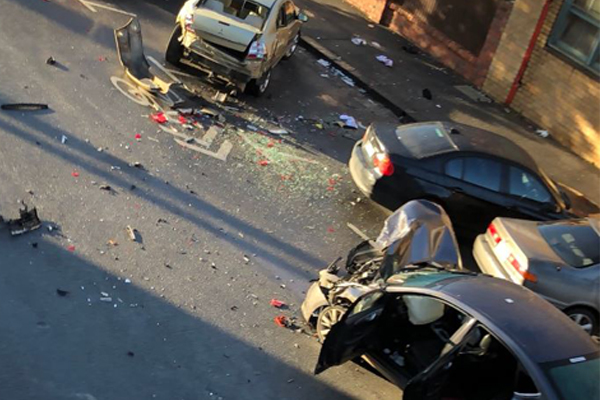 Police have rejected claims of a “no arrest policy” after Sunday’s wild scenes in Collingwood which left seven people injured.

A mass brawl broke out after up to 200 youth left a record label launch at the Gasometer Hotel.

Acting Deputy Commissioner Bob Hill told Neil Mitchell it was a volatile situation for police officers but denied reports there wasn’t enough police resources on the ground as it descended into chaos.

“This notion we have a no arrest policy is complete nonsense,” he said.

“We had police on the ground in a very timely manner.”

Police have confirmed an 18-year-old Cranbourne man has been arrested after the brawl and has been released without charge pending further investigations.

Neil: Do you agree it’s a bad look (with these incidents) where we’ve got people hiding in their houses while thugs are running around the streets, and no immediate accountability?

Acting Deputy Commissioner: I do not suggest to you for one moment that’s acceptable. In terms of the fear of crime in the community, completely reasonable in the circumstances. But people are held to account.

Police say those attending the event were primarily Pacific Islander in appearance and African-Australians.

Paul Crockford, who lives on a second floor apartment in Mater Street, told Neil Mitchell the noise of a group of about 50 people woke him in the early hours.

But he said the group weren’t doing anything wrong, except making a bit of noise, until “something triggered” the huge fight.

He said he witnessed a car “gunning it” towards the crowd who had spilled out on the street.

One man was pinned between cars after a car allegedly ploughed into the crowd.

“They seemed to be a typical group,” he said.

“All of a sudden something triggered something, next thing I know a group of them were belting into a man against our apartment building, they were bashing into him, there was a lady screaming.

“Next thing they were all having a go for it in the middle of the street.”

Click PLAY to hear more from Paul on 3AW Mornings