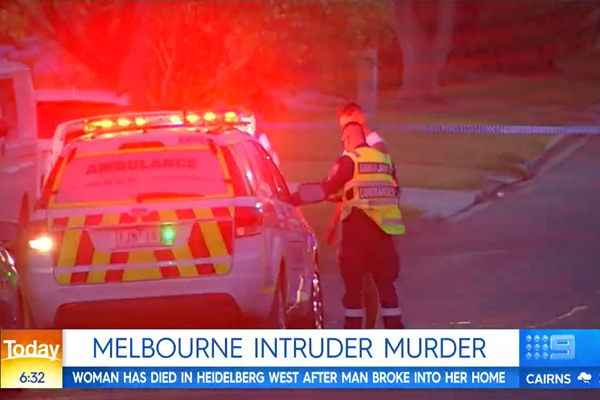 A woman has died in an aggravated burglary which turned deadly at her Heidelberg West home.

The man is believed to have broken into a house on Liberty Parade and violently assaulted the woman at about 8pm last night.

A second man, believed to have been known to the victim, rushed to help and managed to restrain the alleged offender until police arrived.

But when emergency services arrived, they sadly couldn’t save the woman’s life.

The alleged offender was taken to hospital where he remains under police guard.

Neighbours say they heard screams at the time of the incident, and the blood-covered attacker was behaving erratically, trying to run up trees and hide under cars.

Police are still investigating the exact circumstances surrounding the incident.

A Nine cameraman was standing outside the home where the deadly crime occurred last night when he was attacked by another man.

The man was seen talking to police before he turned to the cameraman and charged into him at high speed, knocking him over.

“The camera has been completely destroyed.”

Scott Whiston one of the camera crew spoke with 3AW’s Neil Mitchell describing the incident as “intimidating” and in “slow motion”.

“We got to a scene around 8.45pm last night in Heidelberg West, in respect of the scene we set up around 80m from the scene,” said Mr Whiston.

“We noticed there was a male being interviewed on the bonnet of the police car by two detectives and he was covered in blood.

“Whilst we were taking a few shots he noticed us, saw red, and just bolted at us.

“He took all his anger out on the camera, knocked it off the tripod and was jumping on it.

Police have confirmed the man who trashed the gear was not the person arrested in link to the murder.

Press PLAY below to see the footage of the cameraman being attacked.

A man talking to police has charged at a @9NewsAUS cameraman at the scene of a Melbourne woman’s murder. #9Today pic.twitter.com/A6wyJEJMD4

Anyone who witnessed the incident or who has information is urged to contact Crime Stoppers on 1800 333 or submit a confidential crime report at crimestoppersvic.com.au