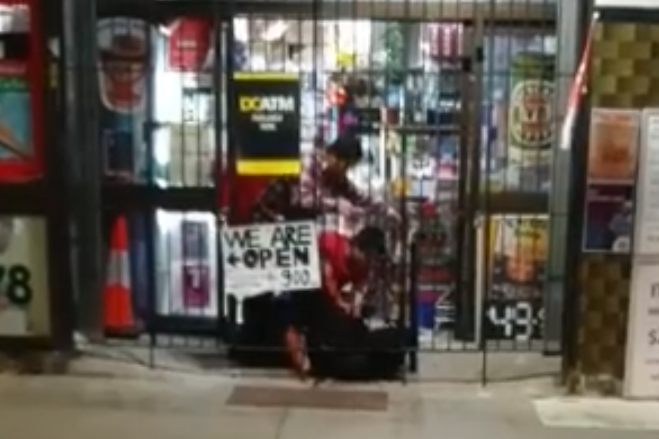 Two people have been injured in a violent supermarket robbery in Melbourne’s north.

Four men arrived at an IGA on North Street, Hadfield at about 8.45pm last night.

One man entered the premises and threatened the owner and his son with a gun, demanding they hand over cash.

The shop owners refused to surrender the money, and a fight ensued, with a gun going off.

Jason Chen, one of the shopkeepers, said the offender fired shots at a wall in an attempt to frighten them.

“They pointed the gun at my dad and we just tried to fight back,” he told Neil Mitchell.

“He tried to scare my dad, he shoot on the wall.

“But my dad didn’t get scared.

“I see the guy and I then just quickly run into his back.”

Mr Chen said he feared for the safety of his children, who were at the premises at the time of the violent attempted robbery.

“I’ve got my family in the shop here at the moment so I had to do something for them. I don’t want something to happen to them,” he said.

A Hadfield resident told Ross and John she was making her children’s lunches when she heard “really full on screaming”.

When she arrived at the IGA near her home, the shopkeepers had tackled one of the offenders to the ground and were beating him with a metal bat.

“They had one of the guys who tried robbing the shop, he was actually on the floor and he was getting beaten up big time,” she said.

“He was beaten quite severely, he had blood coming down his head.

“Three of the other robbers got into their car and sped off with their lights off.”

In footage captured at the scene, one of the shopkeepers can be heard yelling “I don’t care, you nearly shot my f–ing head off!” at the offender.

Police say one of the shop attendants suffered a cut to his head while the offender was taken to hospital with non-life threatening injuries.

Armed Crime Squad detectives are currently on scene and the investigation is ongoing.

Anyone who witnessed the incident or with further information is urged to contact Crime Stoppers on 1800 333 000 or submit a confidential report online at www.crimestoppersvic.com.au