The number of people listed as missing in Victoria’s bushfire zone has increased to 28.

Two people have been confirmed dead.

It comes after Daniel Andrews last night declared an official state of disaster in six Victorian shires and three alpine resorts, meaning those who can leave are now legally obliged to do so.

The declaration gives the government unprecedented powers to tackle the devastating bushfires.

It’s the first time such powers have been used since the legislation was created in the wake of the 2009 Black Saturday bushfires.

The Victorian Government took the extraordinary step of calling a press conference at 10.45 on Thursday after receiving word that weather conditions over the coming days were going to be even worse than expected.

“If you can leave, then you must leave,” Daniel Andrews said.

“We cannot guarantee your safety.”

The Premier also went on to confirm a second person had been killed in the fires.

There are grave fears still held for more than a dozen people, who remain unaccounted for.

THE IMPACTED SHIRES AND ALPINE RESORTS

People in these areas have been warned to leave immediately.

“Fire weather on Saturday is predicted to be extreme, creating fire storm conditions which may not be survivable,” the notices read.

Mayor of Towong Shire, David Wortmann, urged residents to leave if they possible can, and do so early.

“You can be cut off quickly,” he warned.

“I encourage people to keep updated at all times, and if possible, leave early.

Cr Wortmann said the his shire will be impacted further tonight and at the weekend.

“The fire services, they’re not trying to suppress the fire at the moment, they’re trying to save assets and save lives,” he said.

“The fire ground is that large that no, there’s no suppression.”

“With the weather conditions on the weekend … those risks are extreme.”

The Bureau of Meteorology says it will be hot in the north-east of the state today, but the change tomorrow is the big problem for those in fire affected areas.

“Tomorrow is the day we get the change coming through, so northerly winds will develop during tomorrow morning. That change is expected to push out through East Gippsland during the early to mid-afternoon, so getting to Lakes Entrance probably just before midday and pushing out through Mallacoota around about 3 o’clock in the afternoon,” Senior Forecaster Dean Stewart told 3AW’s Kate Stevenson and Tony Leonard.

“It will take longer to push up through the north-east of the state, so it won’t get through some of those areas until late afternoon.

Orbost and Mallacoota are expected to reach 41 degrees on Saturday, with temperatures soaring to 43 at Corryong and 45 at Albury-Wodonga.

Some rain is expected on Sunday, but Mr Steward said it likely won’t be enough to stop significant fires.

“Sunday into Monday  … it does look like producing some rain throughout eastern parts of Victoria. At this stage, falls of 10, possibly 20mm,” he said.

“It will certainly subdue a lot of the fire activity if we do see those sort of totals.”

Meanwhile, more than 1000 people will today be evacuated from the popular holiday town of Mallacoota, which has been decimated by fires.

One navy ship, the MV Sycamore has taken 57 people from Mallacootal, while more than 900 others are set to leave by 5pm opn the HMAS Choules. 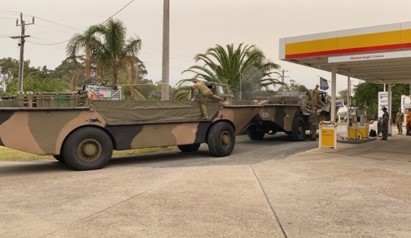 “People have become quite desperate to leave,” he told 3AW’s Kate Stevenson and Tony Leonard.

“For people who can’t get on to the ship they’re being offered flights out of here today.

“A number of airforce helicopters are arriving today to get those people out.”